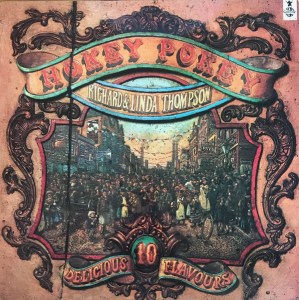 This is one of Richard and Linda Thompson’s better releases, their second in fact, following the luminous I Want to See the Bright Lights Shine from a year earlier. Rich and full-bodied, with big bass and gobs of studio ambience, this pressing presents the music the way it was meant to be heard

What We’re Listening For on Hokey Pokey

Here are some of the things we specifically listen for in a vintage British Folk Rock record.

Our hottest Hot Stamper copies are simply doing more of these things better than the other copies we played in our shootout. The best copies have:

The Thompsons, from the opening Irish fiddle derivation of a Chuck Berry riff, through Linda’s exquisite performance of “A Heart Needs a Home,” to their cover of Mike Waterson’s “Mole in a Hole” which closes the record, once again create a timeless amalgam of folk and rock…

Hokey Pokey is an often overlooked gem in the Thompsons’ luminous catalog.