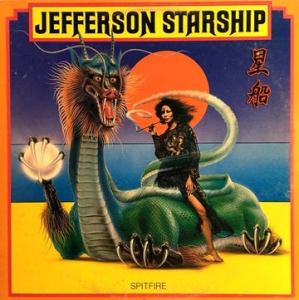 What We’re Listening For on Spitfire

Spitfire was Jefferson Starship’s 1976 follow-up to the chart-topping Red Octopus (1975), and it found the band in a cooperative mood. All seven bandmembers earned writing credits on at least one of the nine songs, along with eight outsiders, and even drummer John Barbata got a lead vocal on the simple rock & roll song “Big City.” But the three main power centers in the group remained in place. Singer/guitarist Paul Kantner continued to turn out his lengthy, complex songs with their exhortatory, vaguely political lyrics…

…Weaving the three styles together were the fluid lead guitar work of Craig Chaquico and the alternating bass and keyboard playing of David Freiberg and Pete Sears. The result was an album that quickly scaled the charts, spending six consecutive weeks at number three in Billboard and going platinum.