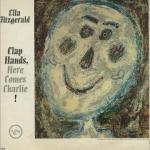 As you probably know, I own superb copies of the stereo. They both fade into pastel in comparison with this mono.

The beat on the stereo is present and accounted for, but here it is palpable and driven, giving thrust and holographic dimension to her voice. Here it really swings. There it provides pleasing atmospherics and depth and transparency; here it is compelling, forceful and electric. Here it dances. Here her voice has an intimacy, nuance and projection that is not available in the stereo.

I, too, love this recording. I was blown away by the mono, which I played on my mono system. It reminded me of the wonderful early mono Mercury recordings of Dinah Washington and Sarah Vaughn and Helen Merrill, which is why I set up the mono system in the first place.

We’re absolutely crazy about this album, and we’ve finally found a mono copy worthy of White Hot Stamper sonic status on BOTH sides.

Folks, if you’re in the market for one of the most magical female vocal recordings we know of, today is your lucky day.

Folks, this record came as a SHOCK — the first and ONLY mono pressing we have ever played that not only was competitive with the best stereo copies, but actually bettered them in some ways. Some IMPORTANT ways I might add.

We’ve played quite a number of mono pressings of Clap Hands over the years, and in the aggregate they’re exceedingly mediocre. On most of the ones we’ve ever played Ella was distant, dull and lifeless. Feh! Who wants to play a record the sounds like that? Especially when the music is so good.

What’s So Special About This Mono Anyway?

Well I’m more than happy to tell you. It’s simply this: the mono lets you know that there was a bass player at the session in a way that the stereo copies — none of them — do not. The bass player is front and center (in mono where else would he be?) in the mix and he DRIVES the rhythmic elements of the songs so strongly that the songs actually seem to pick up pace compared to the way they sound on the stereo LPs.

For the first time you really get the feeling that this is a tightly-knit, swinging jazz combo that Ella is fronting. Everybody is playing together, right there in the center, with the drums and the bass as a unit laying down a super-solid rhythm line behind Ella.

What was surprising, even shocking in a way, was how much better Ella got as a singer. She swings more. She’s more energetic. She’s picked up the tempo, how I don’t know, but that’s the feeling you get when you hear her in mono on this copy.

And every bit as surprising was the fact that the slow songs got better too! Round Midnight and Signing Off aren’t faster, but she seems to somehow be feeling the lyric more, finding more emotion in it. Again, I have no idea how. I just know I heard it and felt it. It’s real.

Longtime customers know that I have been raving about this album for close to two decades; ever since I first heard it, in fact. I consider it the finest female vocal album in the history of the world. I could go on for pages about this record. Suffice to say that this is a record that belongs in every right-thinking Music Lover’s collection.

Here are some records that we think sound great in MONO.

Cry Me A River
This Year’s Kisses
Good Morning Heartache
(I Was) Born To Be Blue
Clap Hands, Here Comes Charlie!
Spring Can Really Hang You Up The Most
Music Goes ‘Round And ‘Round

This early ’60s studio session captures Ella Fitzgerald moving toward the smaller, more pointedly jazz-inflected ensembles that would shape her career in her final decades. After the lush orchestrations of her classic series of composer songbooks, which found her collaborating with the best arrangers, the intimate scale and easy interplay of a crack band provide a wonderful platform for the spirited performances here.

That Ella herself savored the opportunity is reflected in a program that includes Thelonious Monk’s “After Midnight” and a breezy, potent ride through the Charlie Parker/Dizzy Gillespie anthem, “Night In Tunisia.” With a mix of bona fide standards and revived swing classics, this is a rediscovered gem, cause enough to clap hands.

As of this writing, all 19 of the user reviews on Amazon give the album Five Stars. Now when have you ever seen such unanimity?