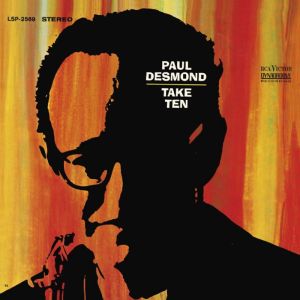 For us audiophiles both the sound and the music here are enchanting. If you’re looking to demonstrate just how good 1963 All Tube Analog sound can be, this killer copy will do the trick.

This vintage pressing is spacious, sweet and positively dripping with ambience. Talk about Tubey Magic, the liquidity of the sound here is positively uncanny. This is vintage analog at its best, so full-bodied and relaxed you’ll wonder how it ever came to be that anyone seriously contemplated trying to improve it.

This IS the sound of Tubey Magic. No recordings will ever be made like this again, and no CD will ever capture what is in the grooves of this record. There may well be a CD of this album, but those of us in possession of a working turntable and a good collection of vintage vinyl could care less.

An Overlooked Classic of Cool Jazz

What the best sides of this album have to offer is clear for all to hear:

Now listeners enter the heart of the Paul Desmond/Jim Hall sessions, a great quartet date with Gene Cherico manning the bass (Gene Wright deputizes on the title track) and MJQ drummer Connie Kay displaying other sides of his personality.

Everyone wanted Desmond to come up with a sequel to the monster hit “Take Five”; and so he did, reworking the tune and playfully designating the meter as 10/8. Hence “Take Ten,” a worthy sequel with a solo that has a Middle-Eastern feeling akin to Desmond’s famous extemporaneous excursion with Brubeck in “Le Souk” back in 1954. It was here that Desmond also unveiled a spin-off of the then-red-hot bossa nova groove that he called “bossa antigua” (a sardonic play-on-words meaning “old thing”), which laid the ground for Desmond’s next album and a few more later in the decade.

Two of the best examples are his own tunes, the samba-like “El Prince” (named after arranger Bob Prince), an infectious number with on-the-wing solo flights that you can’t get out of your head, and the haunting “Embarcadero.” Hall now gets plenty of room to stretch out, supported by Kay’s gently dropped bombs, and he is the perfect understated swinging foil for the wistful altoist. There is not a single track here that isn’t loaded with ingeniously worked out, always melodic ideas.