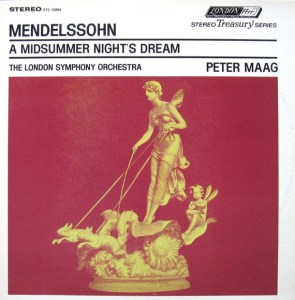 Audiophiles have known of this record’s sublime sonic qualities for decades. As our stereos get better, so do amazingly natural recordings such as this one.

Speakers Corner did a reissue of this record on heavy vinyl, which was quite good — too fat in the mid-bass but otherwise acceptable. It sure doesn’t sound like this though!

This is the real thing. You won’t find too many 180 gram records that sound like this one, if you can find any.

This vintage London pressing has the kind of Tubey Magical Midrange that modern records can barely BEGIN to reproduce. Folks, that sound is gone and it sure isn’t showing signs of coming back. If you love hearing INTO a recording, actually being able to “see” the performers, and feeling as if you are listening live to the London Symphony Orchestra, this is the record for you. It’s what vintage all analog recordings are known for — this sound.

What We’re Listening For on A Midsummer Night’s Dream

Mendelssohn wrote the incidental music, Op. 61, for A Midsummer Night’s Dream in 1842, 16 years after he wrote the overture. It was written to a commission from King Frederick William IV of Prussia. Mendelssohn was by then the music director of the King’s Academy of the Arts and of the Leipzig Gewandhaus Orchestra. A successful presentation of Sophocles’ Antigone on 28 October 1841 at the New Palace in Potsdam, with music by Mendelssohn (Op. 55) led to the King asking him for more such music, to plays he especially enjoyed. A Midsummer Night’s Dream was produced on 14 October 1843, also at Potsdam. The producer was Ludwig Tieck. This was followed by incidental music for Sophocles’ Oedipus at Colonus (Potsdam, 1 November 1845; published posthumously as Op. 93) and Jean Racine’s Athalie (Berlin, 1 December 1845; Op. 74).

The A Midsummer Night’s Dream overture, Op. 21, originally written as an independent piece 16 years earlier, was incorporated into the Op. 61 incidental music as its overture, and the first of its 14 numbers. There are also vocal sections and other purely instrumental movements, including the Scherzo, Nocturne and “Wedding March”. The vocal numbers include the song “Ye spotted snakes” and the melodramas “Over hill, over dale”, “The Spells”, “What hempen homespuns”, and “The Removal of the Spells”. The melodramas served to enhance Shakespeare’s text.

Act 1 was played without music. The Scherzo, with its sprightly scoring, dominated by chattering winds and dancing strings, acts as an intermezzo between acts 1 and 2. The Scherzo leads directly into the first melodrama, a passage of text spoken over music. Oberon’s arrival is accompanied by a fairy march, scored with triangle and cymbals.

The vocal piece “Ye spotted snakes” (“Bunte Schlangen, zweigezüngt”) opens act 2’s second scene. The second intermezzo comes at the end of the second act. Act 3 includes a quaint march for the entrance of the Mechanicals. We soon hear music quoted from the overture to accompany the action. The Nocturne includes a solo horn doubled by bassoons, and accompanies the sleeping lovers between acts 3 and 4. There is only one melodrama in act 4. This closes with a reprise of the Nocturne to accompany the mortal lovers’ sleep.

The intermezzo between acts 4 and 5 is the famous Wedding March, probably the most popular single piece of music composed by Mendelssohn, and one of the most ubiquitous pieces of music ever written.

Act 5 contains more music than any other, to accompany the wedding feast. There is a brief fanfare for trumpets and timpani, a parody of a funeral march, and a Bergamask dance. The dance uses Bottom’s braying from the overture as its main thematic material.

The play has three brief epilogues. The first is introduced with a reprise of the theme of the “Wedding March” and the fairy music of the overture. After Puck’s speech, the final musical number is heard – “Through this house give glimmering light” (“Bei des Feuers mattem Flimmern”), scored for soprano, mezzo-soprano and women’s chorus. Puck’s famous valedictory speech “If we shadows have offended” is accompanied, as day breaks, by the four chords first heard at the very beginning of the overture, bringing the work full circle and to a fitting close. 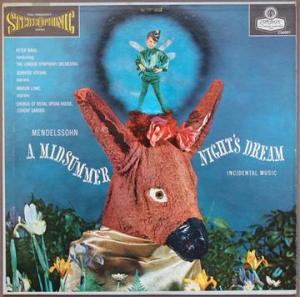 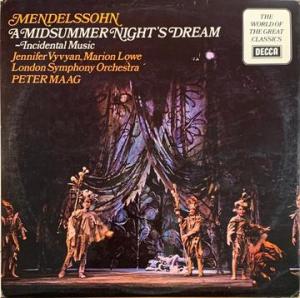