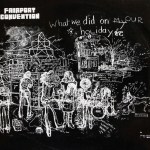 This RARE Island Sunray British Import LP has Hot Stamper sound, full of the Tubey Magic you expect from a British Folk album in 1969 (and the unavoidable sonic shortcomings you should expect if you know much about this band and their records).

It’s without a doubt the nicest copy we have ever seen, the acquisition of which was purely a matter of luck, as early pressings are virtually impossible to find in anything but beat-to-death condition.

The “haunting, ethereal” vocals of the lovely Sandy Denny (or Alexandra Elene McLean Denny as she’s listed on the sleeve) are sublime on this British early copy.

Some of you may recognize her voice from a ditty called ‘Battle of Evermore,’ found on a grayish ’70s rock album that no one even bothered to name. Wonder what ever became of that group? No doubt by now their story is lost to the sands of time. I have to say I thought the music was pretty good though.

The sound varies greatly from track to track. We played the first three songs on each side and guessed that the rest would fall in line with the average of the three we heard.

The third track gets the balance of tubes and clarity about right.

The second track has a Fleetwood Mac bluesy sound with grungy guitars and surprisingly sweet and breathy vocals.

The first track has too many tubes and sounds “dubby.”

Again, the first track is rich but a bit too tubey.

Track two gets it right — still Tubey Magical but clear and clean, some of the best sound we heard.

Track three is the same way, rich and sweet and maybe a bit fat but that’s the way these British Folk Albums are supposed to sound, if our experience with dozens of them can serve as a guide.

Fotheringay
Mr. Lacey
Book Song
The Lord Is in This Place
No Man’s Land
I’ll Keep It With Mine

Sandy Denny’s haunting, ethereal vocals gave Fairport a big boost on her debut with the group. A more folk-based album than their initial effort, What We Did on Our Holidays was divided between original material and a few well-chosen covers. This contains several of their greatest moments: Denny’s “Fotheringay,” Richard Thompson’s “Meet on the Ledge,” the obscure Joni Mitchell composition “Eastern Rain,” the traditional “She Moves Through the Fair,” and their version of Bob Dylan’s “I’ll Keep It With Mine.” And more than simply being a collection of good songs (with one or two pedestrian ones), it allowed Fairport to achieve its greatest internal balance, and indeed one of the finest balances of any major folk-rock group.