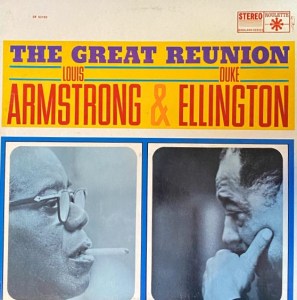 Note that the second track on both sides is slightly smoother and more natural than the first. Listen for it!

Top end extension is critical to the sound of the best copies. Lots of old records (and new ones) have no real top end; consequently, the studio or stage will be missing much of its natural air and space, and instruments will lack their full complement of harmonic information. Strings and brass with get shrill and congested without enough top end air to breathe.

Tube smear is common to most pressings from the ’50s and ’60s and this is no exception. The copies that tend to do the best in a shootout will have the least (or none), yet are full-bodied, tubey and rich. (Full sound is especially critical to the horns; any blare, leanness or squawk ruins much of the fun, certainly, at the loud levels the record should be playing at.)

Louis Is the Man

We’re always on the lookout for Louis Armstrong records with good sound. In our experience finding them is not nearly as easy as one might think. Far too many of his recordings are poorly recorded, with sound that simply can’t be taken seriously — fine for old consoles but not so good on modern audiophile equipment.

We assume most audiophiles got turned on to his music from the records that Classic Records remastered back in the mid-’90s, For those of you who were customers of ours back then, you know that I count myself among that group.

Having long ago given up on Heavy Vinyl LPs by Classic and others of their persuasion — we refer to it as Setting a Higher Standard — these days we are in a much better position to devote our resources to playing every Louis Armstrong album on every pressing we can get our hands on, trying to figure out what are the copies — from what era, on what label, with what stampers, cut by whom, stereo or mono, import or domestic — that potentially have the Hot Stamper sound, the very Raison d’être of our business.

We have to play each and every one of the records we’ve cleaned for our shootout anyway, whether we think it’s potentially the best pressing or not. There is no other way to do it. Right Stamper, Wrong Sound is an undeniable reality in the world of records. It’s not unheard of for the same stampers to win a shootout, do moderately well on another copy, and then come in dead last on a third.

Louis Armstrong was the first jazz superstar, a trumpeter, singer, and occasional actor who became a global American icon. Duke Ellington didn’t lead the most popular orchestra of the swing era, but he led one of the most creative, and his popularity — and creativity — far outlasted the days of the big bands.

In 1961, the Duke sat in with Armstrong’s band, and the two got down to some serious good-time nostalgia. The session is a relaxed yet spirited one, with the leaders alternating between each other’s best-known songs. One of the best things about this configuration is the sound of the Duke’s piano — an underrated pianist, he seldom recorded in such an intimate context.