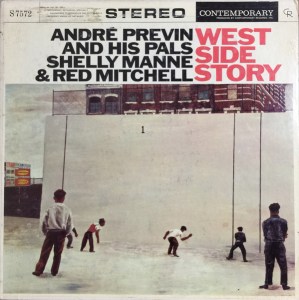 One of Previn’s best piano trio records, this album was recorded in 1959 by Roy DuNann while at the height of his engineering powers.

The two Must Owns from his many sessions at Contemporary are this album and Bells Are Ringing. We are not aware of any of his jazz piano albums on other labels being much better than passable and most are not worth picking up at any price. Believe me, we’ve tried. The one exception I can think of is Four to Go on Columbia. It’s pretty good. Not in the same league as his Contemporary recordings by a long shot, but better than most of his output from the ’60s.

For both the albums mentioned above the Black Label originals in stereo are the best way to go, but finding them in clean audiophile playing condition is no walk in the park, which is the main reason it’s been four years since we did either title, and I think we have not been able to find a single copy of Bells worth buying since then. Some records show up on the site and are never seen again. That may be one of them. Time will tell.

This vintage Contemporary stereo pressing has the kind of Tubey Magical Midrange that modern records rarely even BEGIN to reproduce. Folks, that sound is gone and it sure isn’t showing signs of coming back. If you love hearing INTO a recording, actually being able to “see” the performers, and feeling as if you are sitting in the studio with the trio, this is the record for you. It’s what vintage all analog recordings are known for — this sound.

What the best sides of West Side Story have to offer is not hard to hear:

The Piano Is Key

On the best copies of the album, the sound of the piano is solid, full-bodied, with both weight and warmth, just like the real thing. The copies of the album with a piano that sounded lean or hard always ended up having problems with the other instruments as well. (This should not be surprising; the piano was designed to be the single instrument most capable of reproducing the sound of an entire orchestra.)

What We’re Listening For on West Side Story

The last of a series of showtune albums recorded by the trio of pianist Andre Previn, bassist Red Mitchell and drummer Shelly Manne finds the all-star group focusing on the music of West Side Story (Previn and Manne alternated leadership, and it was the drummer’s good fortune to have the famous My Fair Lady album under his own name).

As usual, the melodies are treated respectfully yet swingingly, and Andre Previn in particular excels in this setting. Recommended.