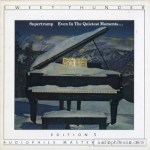 We’re big fans of this album here at Better Records and consider it to be one of Supertramp’s best. That said, this half-speed is a disgrace.

There is absolutely no presence to the sound of the copy we played. The guitars, which on some cuts are double tracked, each coming directly out of the speaker hard right and hard left, are so dull it sounds like the speaker is facing the back wall!

I think I know why — there is quite a bit of processing distortion and grit on the vocals. The Audiophile Masterminds at Sweet Thunder thought the best way to deal with it was to suck the hell out of the presence region (3 to 6k), which takes off some of the edge on the vocals but throws a thick blanket over the acoustic guitars.

On the opening track of side one, the big hit off the album, it takes all the energy out of the one element that really drives the music — the guitars.

This is truly one of the worst Half-Speed mastered records we have ever had the displeasure of hearing.

Shame on you, Sweet Thunder.

This link will take you to some other exceptionally bad records that were marketed to audiophiles for their supposedly superior sound. On today’s modern systems, it should be obvious that they have nothing of the kind and that, in fact, the opposite is true.