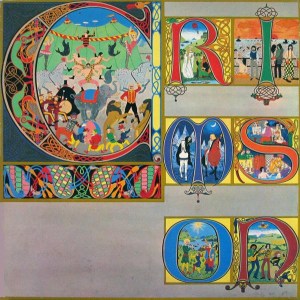 This early Island UK pressing has the kind of Tubey Magical Midrange that modern records rarely even BEGIN to reproduce. Folks, that sound is gone and it sure isn’t showing signs of coming back. If you love hearing INTO a recording, actually being able to “see” the performers, and feeling as if you are sitting in the studio with the band, this is the record for you. It’s what vintage all analog recordings are known for — this sound.

What the best sides of Lizard have to offer is not hard to hear:

Finding the Right Sound for Lizard

For Big Production Prog Rock Albums such as Lizard there are some obvious problem areas that are often heard on at least one or two sides of practically any copy of the album.

Transparency, clarity and presence are key. Note that none of the British copies we played was thin and anemic. (The domestic copies are made from dubs and can’t begin to compete.) Almost all had plenty of Tubey Magic and bottom end, so thankfully that was almost never a problem. They did however tend to lack top end extension and transparency, and many were overly compressed.

What We’re Listening For on Lizard

Cirkus (Including: Entry Of The Chameleons)
Indoor Games
Happy Family
Lady Of The Dancing Water

Lizard is very consciously jazz-oriented — the influence of Miles Davis (particularly Sketches of Spain) being especially prominent — and very progressive, even compared with the two preceding albums. The pieces are longer and have extensive developmental sections, reminiscent of classical music, and the lyrics are more ornate, while the subject matter is more exotic and rarified — epic, Ragnarok-like battles between good and evil that run cyclically.

The doom-laden mood of the first two albums is just as strong, except that the music is prettier; the only thing missing is a sense of humor… At the time of its release, some critics praised Lizard for finally breaking with the formula and structure that shaped the two preceding albums, but overall it’s an acquired taste.