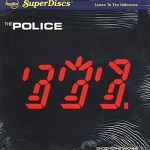 Reviews and Commentaries for Ghost in the Machine

More of the Music of Sting and The Police

And to think we used to actually like the sound of the Nautilus pressings! They suffer from all the same shortcomings other Nautilus and similar half-speeds suffer from: the kind of pretty but lifeless and oh-so-boring sound that we describe in listing after listing.

Three of the Best, Or So We Thought

I just did shootouts with three of the best Nautilus Half-Speeds: Heart, The Police’s Ghost in the Machine, and Little Feat. None of them sound like the real thing, and especially disappointing was one of my former favorites, the Little Feat album.

On the title track the Nautilus is amazingly transparent and sweet sounding. There are no real dynamics or bass on that track, so the “pretty” half-speed does what it does best and shines. But all the other tracks suck in exactly the same way Night and Day does. Cutting the balls off Little Feat is not my idea of hi-fidelity.

We put audiophile beaters up for sale every week. Each and every one of them is a lesson on what makes one record sound better than another. If you want a wall full of good sounding records, we can help you make it happen. In fact it will be our pleasure. Down with audiophile junk and up with Better Records.

The point of this commentary is simply this: if half-speed mastering is a technology designed to improve the sound of records, it has to be seen as a miserable failure.

There is almost always a non-half-speed-mastered pressing that will be superior to the half-speed. The only exceptions to that rule will be those LPs whose real-time mastering was poor to start with. This is as it should be. You can beat a bad record with a half-speed, but you sure can’t beat a good one. We prove it every week here at Better Records.

Take a look in the Hot Stamper sections and you will find hundreds of records that are dramatically better sounding than any half-speed ever made. We built our reputation and practically our entire business on that simple idea. Furthermore, our philosophy is our commitment to you, the customer. We are happy to refund your money if you don’t see things our way. We’re confident that you will have no trouble recognizing the faults of the half-speed when The Real Thing comes along. We’re sure you’ll agree with us that the real Audiophile Pressing is simply the one that sounds better. And to that we say bring it on — the next shootout is about to begin.