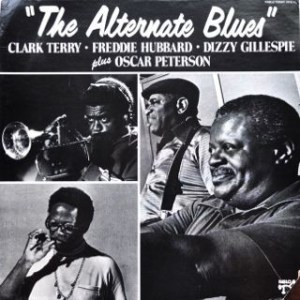 With Hot Stamper sound on both sides, this Pablo disc shows you what three of the greatest trumpeters of the last fifty years can do given the opportunity, nay, the encouragement, to let loose on a handful of classic slow blues jams. Many of the tracks here run in excess of eight minutes, giving the players plenty of space to explore, yet practically all of them are taken at a fairly slow pace, what used to be called a “slow drag”, making them that much more involving and emotional. These are not your classic “blowing sessions” where the players try to outdo each other. No, this is something quite different.

Norman Granz revered the classic “jam session”, of which this is a prime example; he produced dozens for the various labels he owned over the years. Playing this album we can see why. The heart of the blues is here in every measure.

The album was recorded in 1980 by Dennis Sands, one of my favorite Pablo recording engineers, the man behind the brilliant Farmer’s Market Barbecue and many others. (Soon enough he crossed over to films and has done the sound for more than 250 to date. He must be pretty good to get that much work, and you can be sure he makes a lot more money for his film work than he would for recording jazz dates.)

A++, clear, open and so dynamic! Fairly rich but not quite as full-bodied as side two, so let’s call this one Super Hot.

A++, with a wonderfully rich and tubey guitar. The muted trumpet is relaxed, never aggressive, yet clear. No smear either. A bit more top end extension and we would have called this side White Hot.

What to Listen For – Transparency

What typically separates the killer copies from the merely good ones are two qualities that we often look for in the records we play: transparency and lack of smear. Transparency allows you to hear into the recording, reproducing the ambience and subtle musical cues and details that high-resolution analog is known for.

(Note that most Heavy Vinyl pressings being produced these days seem to be quite Transparency Challenged. Lots of important musical information — the kind we hear on even second-rate regular pressings — is simply nowhere to be found. That audiophiles as a whole — including those that pass themselves off as the champions of analog in the audio press — do not notice these failings does not speak well for either their equipment or their critical listening skills.)

What to Listen For – Lack of Smear

Lack of smear is also important, especially on a recording with this many horns, where the leading edge transients are so critical to their sound. If the horns smear together into an amorphous blob, as if the sound were being fed through ’50s vintage tube amps (for those of you who know that sound), half the fun goes right out of the music.

Richness is important — horns need to be full-bodied if they are to sound like the real thing — but so are speed and clarity, two qualities that insure that all the horns have the proper bite and timbre.

Alternate Blues was remastered by Doug Sax in the ’90s for Acoustic Sounds (still in print by the way). It even won a Golden Ear award from TAS. (I don’t think they bestow that award on records anymore; couldn’t find out much about it.)

I’ve never played Sax’s version and probably never will, but I would bet money he ruined it. This is a fairly safe bet since in my opinion he ruined every record he cut for Acoustic Sounds. He’s an amazing engineer but he stopped being amazing somewhere in the ’80s.

Alternate Four
Wrap Your Troubles in Dreams
Ballad Medley
a. Here’s That Rainy Day
b. Gypsy
c. If I Should Lose You

Norman Granz teamed together the very distinctive trumpeters Dizzy Gillespie, Freddie Hubbard and Clark Terry with pianist Oscar Peterson, guitarist Joe Pass, bassist Ray Brown and drummer Bobby Durham for a “Trumpet Summit.” There are four versions of a slow blues (only the fourth was released before), all of which have very different solos from the three trumpeters. In addition they interact on “Wrap Your Troubles in Dreams” and share the spotlight on a three-song ballad medley; Hubbard’s “Here’s That Rainy Day” is hard to beat. This release is not quite essential but fans of the trumpeters will want to pick it up.

For The Alternate Blues, producer Norman Granz set aside his rule against issuing what are variously called in the recording business outtakes, breakdowns, or alternate takes. The reason was that despite missed cues and procedural problems in the rhythm section, Dizzy Gillespie, Freddie Hubbard, and Clark Terry played the blues at a level of passion and expressiveness the equal of the versions originally released on The Trumpet Summit Meets the Oscar Peterson Big 4.