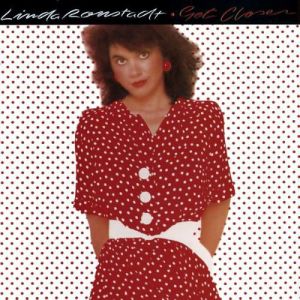 What We’re Listening For on Get Closer

Asylum Records released Get Closer in late September 1982. Reviewers wrote about a newfound confidence in Ronstadt’s vocals. Ken Tucker of Rolling Stone magazine wrote in his November 11 review, “Linda Ronstadt’s voice has never sounded better than it does on Get Closer…its spirit is unassailable.” Noting her turn in Pirates, Tucker wrote that Ronstadt’s vocal development on Broadway “hasn’t made her self-conscious. Just the opposite, in fact: Linda Ronstadt is no longer a prisoner of technique.” Tucker did decry much of the album’s second side, saying that some of the oldies in the soul genre were performed too meticulously.

Stephen Holden of The New York Times also hailed Ronstadt’s vocal performance on the album, writing, “Miss Ronstadt’s singing is so strong and unaffected.” He called the title track “the album’s most adventurous performance” and noted that Ronstadt’s “shouting, growling exuberance” was “reminiscent of Aretha Franklin’s ‘Respect.'”

Commercially, the album peaked at number 31 on the Billboard album chart in late 1982 and was immediately certified Gold by the Recording Industry Association of America for sales of over 500,000 copies. It had surpassed American sales of 900,000 copies at the time of its deletion.

This album’s driving title track, “Get Closer” was written by Washington D.C.-based singer-songwriter Jon Carroll, an original member of the Starland Vocal Band. The song, notable for its unusual 7/4 time signature, was later chosen to promote Close-Up toothpaste (“Want love? Get Close-Up”).

Assisted by a popular MTV music video, “Get Closer” peaked at number 29 on the Billboard Hot 100 and hit the Top 20 in Cash Box magazine. It garnered considerable airplay on AOR (Album-Oriented Rock) stations while its follow-up single, “I Knew You When”, was also aided by a popular music video and peaked at number 37 Pop, number 25 Adult Contemporary, and number 84 Country.

Ronstadt’s seductive interpretation of Jimmy Webb’s “Easy For You To Say” was a surprise Top Ten hit on Billboard’s Adult Contemporary chart in the spring of 1983. “Sometimes You Just Can’t Win,” the B-side to the “Get Closer” single, peaked at number 27 on Billboard’s Hot Country Songs chart.

Ronstadt was nominated in early 1983 for a Grammy Award for Best Pop Vocal Performance Female and Best Rock Vocal Performance Female for the album and the song “Get Closer”, losing to Melissa Manchester and Pat Benatar respectively. The album did, however, win the Grammy for Best Album Package, an art director’s award. The trophy went to well known designers Ron Larson and Kosh.