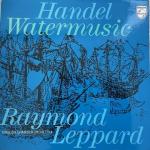 The performance here by the English Chamber Orchestra under the direction of Raymond Leppard is currently my favorite, owing in large part to the fact that it has the kind of sound I find the most natural and enjoyable. This pressing boasts the biggest hall, the most transparency, and it has more clearly layered depth and more space than any other pressing we played. With White Hot stampers on side two and a Super Hot side one, this copy is right up there with the best Water Music we’ve heard.

In a way this may not be quite fair to other equally well-known, well-respected performances. We went through an elimination round for the work a few weeks back, winnowing the recordings down to those that had the best sound, regardless of performance — perhaps some of the discarded records had even better performances than Leppard’s. At this late stage who can say?

We audiophiles want the music we play to sound its best, a requirement which more often than not involves compromises of one kind or another. We are happy to report that that does not appear to be the case with The Water Music (keeping in mind the caveat above).

We managed to find three (!) recordings that had both superb sound and top quality performances. This then is my favorite of the three, though not by much; on the best pressings all were Demo Disc quality, and most were pressed on very quiet vinyl.

White Hot, As Good As It Gets! So much more space, with each section of the orchestra more clear, yet still rich and natural sounding. Shockingly AIRY and WARM, this is the kind of sound that makes it easy to fall in love with a oft-heard piece such as The Water Music. Note how far back the trumpets are in the hall, yet they are clear and tonally correct and not smeared. That’s the sound one hears in performance and rarely on record.

Super Hot, rich and natural sounding, with lovely texture to the strings. There’s huge 3-D space to be heard in the wonderful acoustic of the hall The English Chamber Orchestra recorded in. If you see anything by Leppard and this group on Philips, I would pick it up. (Skip Peer Gynt though, it’s not very good.)

The Water Music dates from Handel’s first years in England, where he arrived in 1710, officially on leave from recent employment in the Elector of Hanover’s court. He returned again in 1712 and stayed permanently after ingratiating himself with Queen Anne, who awarded him a lifetime pension of 200 pounds a year — enough to live on. In 1714, the Elector of Hanover became George I of England on Anne’s death and, far from showing displeasure with his ex-employee, doubled Handel’s royal pension. Indeed, Handel was faring better than the king was. George, who never learned to speak English and brought with him a German inner circle and two German mistresses, was roundly disliked as a foreigner more interested in Hanover than in England. His way of softening the English power structure’s harsh, if essentially accurate, view of him was to entertain it with barge parties.

We know there were royal parties on the Thames in the summers of 1715, 1716, and 1717. Handel probably provided music for those occasions, but the only account that actually mentions him is a letter from Friedrich Bonet, a Prussian diplomat, describing a party on July 17, 1717:

At about eight in the evening the King repaired to his barge. Next to the King’s barge was that of the musicians, about 50 in number – trumpets, horns, oboes, German [i.e, transverse] flutes, French flutes [i.e. recorders], violins, and basses, but no singers. The music had been composed specially by the famous Handel, a native of Halle and his Majesty’s principal court composer. His Majesty’s approval of it was so great that he caused it to be played three times in all, twice before and once after supper, even though each performance lasted an hour. The evening was as fine as could be desired for this occasion and the number of barges and boats full of people wanting to listen was beyond counting.

Though Bonet’s account describes the length and instrumentation of the Water Music more or less as we know it today, the earliest surviving score of “the celebrated Water Musick” dates from the 1730s, after Handel had been using the music in his theatrical presentations just as he used concertos, likely making changes for those occasions as was his practice. As we now know it, the Water Music consists of the two suites on this program – the “horn” suite in F and the “flute” suite in G – and a “trumpet” suite in D.

Typically for Handel, the suites don’t fit any particular mold. The G-major Suite consists of movements that are dances in all but name (Handel did not give them all titles). The F-major Suite is a sort of extended modified French suite, with a stately Lullian beginning to its Overture and some dance movements interspersed with non-dance movements. Handel’s striking use of the horns would have been all the more remarkable in 1717, when horns were rare in orchestras. As far as anyone knows, neither Handel nor any English composer had used horns before, but they have a more prominent role in the Water Music than the solo violins in the concerto that opens this program.

Wikipedia on The Water Music

There is evidence for the different arrangement found in Chrysander’s Gesellschaft edition of Handel’s works (in volume 47, published in 1886), where the movements from the “suites” in D and G were mingled and published as one work with HWV 348. This sequence derives from Samuel Arnold’s first edition of the complete score in 1788 and the manuscript copies dating from Handel’s lifetime.