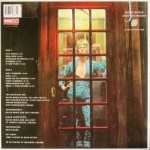 The Simply Vinyl version sounds just like the EMI that came out in the ’90s. Neither are very good. Flat, compressed and badly lacking in Tubey Magic, the right CD probably sounds better than either of these Heavy Vinyl pressings.