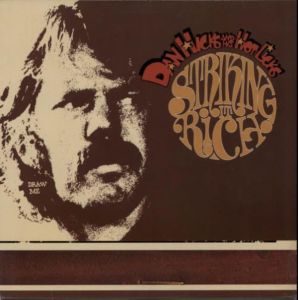 Normally this record sounds thick and dead. It’s very rare to find a copy like this that has any real transparency. The vocals are sweet and silky and the string instruments are more clear in the mix.

There’s nothing more frustrating than a record that defies every effort to hear into it, typically the feeling I get when listening to Dan Hicks’ recordings. But on this pressing I could actually appreciate the music without having to fight the sound.

The tracks with violin accompaniment tend to sound the best for some reason. Some tracks are recorded a bit dry for my taste, but others are just right.

This is probably the band’s masterpiece, all things considered. It’s the most consistent album of theirs overall and has wonderful high points in I Scare Myself and Canned Music.

The Laughing Song
Canned Music
I’m an Old Cowhand (From the Rio Grande)
Woe, the Luck
Presently in the Past
Skippy’s Farewell
Fujiyama

Striking It Rich features 14 more sides of hipster acoustic swing from Hicks and his helpmates, including the fan favorites “I Scare Myself” and “Canned Music.” The band’s musicianship remains mostly on the mark, but there are elements of the album that go beyond kitsch and the humor here is considerably darker than in the past…