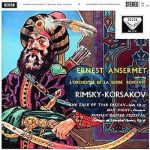 We cracked open the Speakers Corner pressing shown here in order to see how it would fare up against a pair of wonderful sounding Londons we were in the process of shooting out some time ago. Here’s what we heard in our head to head comparison.

The soundstage, never much of a concern to us at here at Better Records but nevertheless instructive in this case, shrinks roughly 25% with the new pressing; depth and ambience are reduced about the same amount.

But what really bothered me was this: The sound was just so VAGUE.

There was a cloud of musical instruments, some here, some there, but they were very hard to SEE. On the Londons we played they were clear. You could point to each and every one. On this pressing that kind of pinpoint imaging was simply nowhere t be found.

Case in point: the snare drum, which on this recording is located toward the back of the stage, roughly halfway between dead center and the far left of the hall. As soon as I heard it on the reissue I recognized how blurry and smeary it was relative to the clarity and immediacy it had on the earlier London pressings. I’m not sure how else to describe it – diffuse, washed out, veiled. It’s just vague.
END_OF_DOCUMENT_TOKEN_TO_BE_REPLACED