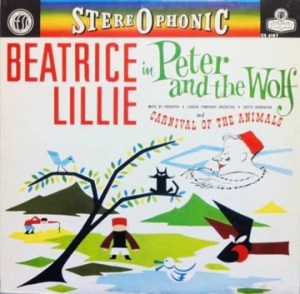 This early UK London pressing has the kind of Tubey Magical Midrange that modern records can barely BEGIN to reproduce. Folks, that sound is gone and it sure isn’t showing signs of coming back. If you love hearing INTO a recording, actually being able to “see” the performers, and feeling as if you are sitting in the studio with the band, this is the record for you. It’s what vintage all analog recordings are known for — this sound.

Beatrice Lillie recording ‘Peter and the Wolf’ at Kingsway Hall, February 10th to 12th 1960, using the M50 ‘Head’ first introduced recording Mozart In Walthamstow Assembly Hall. This design, and several that followed, were intended to retain the characteristics of the omni-directional M50 while at the same time, avoiding what was then thought to be undesirable ‘bleed’ from the back side of the mics into the patterns of their neighbours.”

Differentiating the Decca sound from that of EMI by ear alone is not necessarily an easy thing to do, but Mike believes that the tracking method used by Decca caused them to mix in a particular way which can be heard on the record. The key to understanding the difference between Decca and EMI,” Mike explains, “is that Decca always wanted to mix to two tracks, although they had four-track backups as early the late ’50s, in case they needed to track in a singer who wasn’t on their best day, or rebalance. But the whole concept of Decca was mixing to two-track. EMI went to four-track in the mid ’60s so their records weren’t produced in stereo at the session like Decca’s.”

Mike is also keen to point out that something as fundamental as the choice of microphones had a defining affect on the general sound of Decca’s output. The Decca sound was really the sound of the microphones,” he insists. “The M50 was omnidirectional, designed for the German radio, with a boost at the top and that was a famous Decca trait from the age of 78s, although it was tamed a bit when the discs were cut. Later they mainly used KM56s and KM53s because they were small enough to put on stands in the back but eventually they started using bigger Neumann U67s, U88s and a whole variety of spot microphones. There would often be spots behind the horn section, percussion, on the woodwind, and that also became a Decca trademark.

What We’re Listening For On Peter and the Wolf

Peter And The Wolf

Carnival Of The Animals