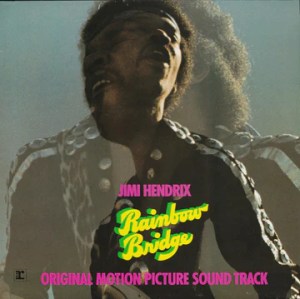 It’s beyond difficult for us to find killer copies of Jimi’s “real” albums, so I advise you Hendrix die-hards not to turn your nose up at this one!

Side one of this album features some amazing material, including “Dolly Dagger” and “Earth Blues,” two of the better songs from the later part of Jimi’s career. (Check out the insightful AMG track reviews near the bottom of this listing.) The instrumental “Pali Gap” is fantastic as well and pure audiophile gold — so spacious and sweet.

Side two features some good live material, including extended renditions of two great tracks — “Hear My Train A Comin'” and “Hey Baby.”

What We’re Listening For on Rainbow Bridge

“Dolly Dagger” is arguably one of the great pop songs of Hendrix’s career. Written towards the very end of his life, the song sounds like it was written years earlier, and it certainly has the same feel as many of the compositions on Hendrix’s debut, Are You Experienced?. Containing a wonderfully funky guitar line, the song is not deep, and certainly containing none of the pretension that marred much of Hendrix’s later work, “Dolly Dagger” is a great, light, pop song, with a enormously attractive, even funny, lyric and a lovely, bouncy melody. Of course, Hendrix’s guitar work is inspired, but it doesn’t draw attention away from what is essentially a brilliantly crafted song.

Led by a Wes Montgomery-inspired riff that sounds like Curtis Mayfield on acid, “Earth Blues” is a fabulous soul-drenched rocker that potentially would have been a great single, had it been released as such. Lyrically, there is a stirring gospel feeling here, and crossed with the overall psychedelic vibe, it was perfect for the 1970 airwaves. Showcasing the feeling on the street at the turn of the ’60s, the song has a great urban feel and contains great energy.