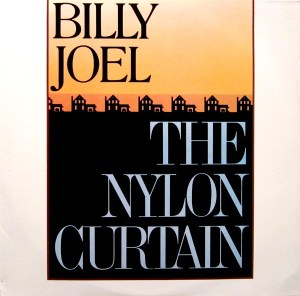 We completed a shootout for The Nylon Curtain a while back and this turned out to be one of the better copies we heard. After playing a stack of mediocre copes, we are completely confident in saying that you’ll have a very hard time finding one that sounds this good.

The process is simple enough. First, you go deep into the sound. There you find something special, something you can’t find on most copies. Now, with the hard-won knowledge of precisely what to listen for, you are perfectly positioned to critique any and all pressings that come your way

She’s Right On Time
A Room Of Our Own
Surprises
Scandinavian Skies
Where’s The Orchestra?

… The Nylon Curtain is where Billy Joel went serious, consciously crafting a song cycle about Baby Boomers in the Reagan era. Since this was an album about Baby Boomers, he chose to base his music almost entirely on the Beatles, the pivotal rock band for his generation. Joel is naturally inclined to write big melodies like McCartney, but he idolizes Lennon, which makes The Nylon Curtain a fascinating cross between ear candy and social commentary.

…the first half of the song suite — “Allentown,” “Laura,” “Pressure,” “Goodnight Saigon,” “She’s Right on Time” — is layered, successful, mature pop that brings Joel tantalizingly close to his ultimate goal of sophisticated pop/rock for mature audiences.