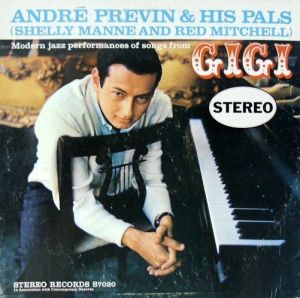 This vintage Contemporary Black Label pressing has the kind of Tubey Magical Midrange that modern records can barely BEGIN to reproduce. Folks, that sound is gone and it sure isn’t showing signs of coming back. If you love hearing INTO a recording, actually being able to “see” the performers, and feeling as if you are sitting in the studio with the band, this is the record for you. It’s what vintage all analog recordings are known for — this sound.

What We Listen For on Gigi

André Previn’s ten records for Contemporary during 1957-1960 were among the finest jazz recordings of his career. Several of the albums were jazz interpretations of scores from Broadway shows although, ironically, the best-known one, My Fair Lady, came out under drummer Shelly Manne’s name… Previn, Manne, and bassist Red Mitchell perform eight songs from the Lerner & Loewe show Gigi. Previn had won an Oscar for his adaptation of the score, so he knew this music quite well. Best known among the songs are “I Remember It Well” and “Thank Heaven for Little Girls,” but the trio also uplifts and swings the other lesser-known tunes.