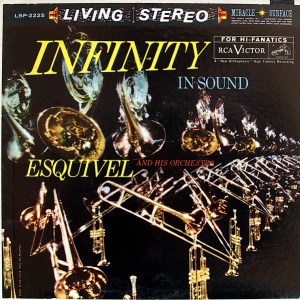 What We’re Listening For on Infinity In Sound

Softly, As In A Morning Sunrise
Music Makers
My Reverie
Johnson Rag
Harlem Nocturne
Take The ‘A’ Train

After several, probably ill-advised collaborative (or sideman) efforts, Esquivel returns to his full glory on Infinity in Sound. This is the second album — after Exploring New Sounds in Stereo — of the “typical” Esquivel, who pushed the envelope of stereophonic “gee-whiz-ardry”… While “Johnson Rag,” “Harlem Nocturne,” “Take the ‘A’ Train,” and “Frenesi” are all good examples of Esquivel in his prime, the chief attraction of the album is its consistency and overall integrity. It is a relief that Esquivel is not trying anything stranger than he already is.