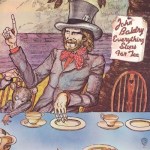 This is a Near Mint Warner Brothers Green Label Original LP with No Bar Code. I played side one of this record all the way through today (5/15/06) and enjoyed it immensely. I would be very surprised to hear a better sounding pressing of this music — it sounds just right. Another outstanding green label Warner Brothers LP — rich, smooth and natural. We love them here at Better Records!

[I would be surprised in 2019 if the British pressings were not quite a bit better. It’s a title we cannot afford to do due to lack of demand, but Brit pressings are the first ones I would go after for a shootout.]

“Everything Stops For Tea comes from a 1930’s English vaudeville play and is quite fun and easy to sing along to! Long John does a blistering version of Willie Dixon’s You Can’t Judge A Book By Its Cover which actually would make a good title for John’s biography which will be written over the next couple of years. Many people have been quick to judge John based on his ballad period or other things. Mother Ain’t Dead is a great acoustic folk song that Long John and Rod Stewart duet on.” – longjohnbaldry.com

Currently, 99% (or more!) of the records we sell are cleaned, then auditioned under rigorously controlled conditions up against a number of other pressings, awarded sonic grades, and eventually condition checked for surface noise.