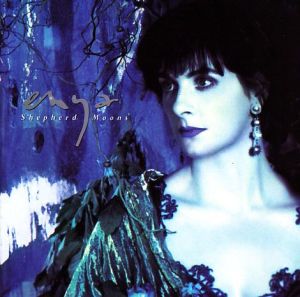 The vinyl on these pressings from the ’90s often had problems like these. I was selling them as brand new imports at the time and they often came with noise issues of one kind or another.

What We’re Listening For On Shepherd Moons

AMG gives this album 4 1/2 stars and it’s easy to see why. Even if it’s not your thing, there’s no denying that Enya is an artist at the very top of her field. If you are going to own one New Age album, you can’t do much better than this (unless you already have a Hot Stamper copy of Watermark).

Shepherd Moons
Caribbean Blue
How Can I Keep From Singing?
Ebudæ
Angeles
No Holly For Miss Quinn

Calling Shepherd Moons a near carbon copy of Watermark puts it quite mildly. Like Watermark, Shepherd Moons opens with the title track, a calm instrumental, has another brief instrumental titled after a Dora Saint book smack in the middle (“No Holly for Miss Quinn”), and concludes with a number incorporating a striking uilleann pipes solo, “Smaointe….”

In general, Enya’s own musical style and work remains the same, again assisted on production by Nicky Ryan and with lyrics by Roma Ryan. Shepherd Moons does have one key factor that’s also carried over from Watermark — it’s quite good listening. Though the total continuity means that those who enjoy her work will again be pleased and those who dislike it won’t change their minds, in terms of finding her own vision and sticking with it, Enya has increasingly polished and refined her work to a strong, elegant degree.

With her trademark understated drama in full flow many other places, especially on the wonderful “Book of Days” (replaced on later pressings with an English language version done for the film Far and Away), Enya shows herself to still have it, to grand effect.