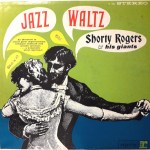 For more on the subject of reissues that beat the originals, click here.

We sold one many years ago, describing it this way: “Beautiful Original with decent sound — rich, smooth and sweet.”

Which it was, but from us that’s little more than damning with faint praise. The Discovery pressing you see below is so much bigger, clearer and livelier it’s almost hard to imagine it and the 1962 Reprise original were both made from the same tape. Something sure went wrong the first time around — I think it’s safe to say at least that much. 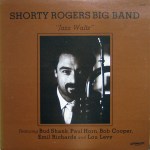 Original equals Better? Not for those of us who play records rather than just collect them. Leave the originals for the Jazz Guys.

The Hot Stamper reissues are for us Music Loving Audiophiles.

Don’t be put off by the title; these are not some sleepy old-fashioned waltzes. This is swingin’ West Coast jazz at its best. The arrangements may be done in waltz time but that sure doesn’t keep them from swingin’.

And the amazingly good sound? Credit BONES HOWE, a man who knows Tubey Magic like practically no one else in the world. The Association, The Mamas and the Papas, The Fifth Dimension, and even Tom Waits — all their brilliant recordings are the result of Bones Howe’s estimable talents as producer and engineer.

More of Our Favorite Recordings By Bones Howe

Shorty Rogers’ Jazz Waltz is exactly that, an exploration of ten compositions played in waltz settings. Only these big-band charts are hardly the waltzes heard on Lawrence Welk’s long-running television series.

Rogers kicks off with a swinging number (“I’m Gonna Go Fishin'”) written by Duke Ellington for the soundtrack to the film Anatomy of a Murder and featuring the leader’s rich flügelhorn. The lyrical take of the centuries-old folk melody “Greensleeves” alternates between the tense rhythm section and Bud Shank’s gorgeous flute solo. Rogers’ delightful “Be as Children” almost sounds as if it was adapted from a gospel song. The brisk treatment of Ellington’s “Echoes of Harlem,” featuring Paul Horn on flute, is refreshing.