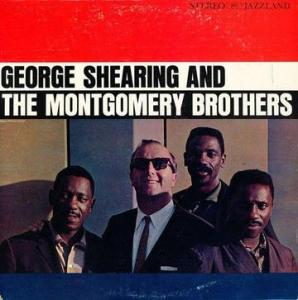 Sometimes the copy with the best sound is not the copy with the quietest vinyl. The best sounding copy is always going to win the shootout, the condition of its vinyl notwithstanding. If you can tolerate the problems on this pressing you are in for some amazing George Shearing music and sound. If for any reason you are not happy with the sound or condition of the album we are of course happy to take it back for a full refund, including the domestic return postage.

This vintage Jazzland pressing has the kind of Tubey Magical Midrange that modern records rarely even BEGIN to reproduce. Folks, that sound is gone and it sure isn’t showing signs of coming back. If you love hearing INTO a recording, actually being able to “see” the performers, and feeling as if you are sitting in the studio with the band, this is the record for you. It’s what vintage all analog recordings are known for — this sound.

Pianist George Shearing meets up with guitarist Wes, vibraphonist Buddy, and bassist Monk Montgomery on this enjoyable if slightly lightweight outing. The performances are a bit too concise at times, but the album has some fine soloing by the principals. Highlights include “Love Walked In,” “Love for Sale,” and “The Lamp Is Low.”

Jazz is very egalitarian and ecumenical; it brings people together, especially those who have a stylistic affinity for certain approaches to the music.

Such was the case when The Montgomery Brothers – guitarist Wes, vibraphonist Buddy and bassist Monk – got together with pianist George Shearing.

Although they never worked as a formal group, The Montgomery Brothers and George did jam together on a few occasions and thankfully produced one album of music for Jazzland Records that features a rich blend of sound between piano, guitar and vibes all firmly supported by Monk Montgomery’s formidable bass work and Walter Perkins’ solid drumming.

The album, which is entitled George Shearing and The Montgomery Brothers, features a number of standards, some original compositions written expressly for the recording date and Latin Jazz tracks on which percussionists Armando Peraza and and Ricardo Chimelis were added.