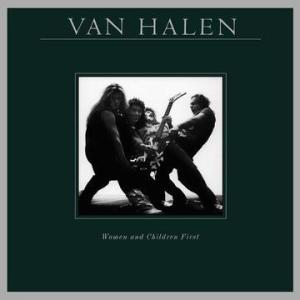 This vintage Warner Brothers white label pressing has the kind of Tubey Magical Midrange that modern records rarely even BEGIN to reproduce. Folks, that sound is gone and it sure isn’t showing signs of coming back. If you love hearing INTO a recording, actually being able to “see” the performers, and feeling as if you are sitting in the studio with the band, this is the record for you. It’s what vintage all analog recordings are known for — this sound.

What We’re Listening For on Women and Children First

Credit Donn Landee (and producer Ted Templeman as well) with the full-bodied, rich, smooth, oh-so-analog sound of the best copies of Women And Children First. He’s recorded or assisted on many of our favorite albums here at Better Records.

Most of the better Doobies Brothers albums are his; all of the good Van Halens of course; Lowell George’s wonderful Thanks I’ll Eat It Here; Little Feat’s Time Loves a Hero (not their best music but some of their best sound); Carly Simon’s Another Passenger (my favorite of all her albums); and his Masterpiece (in my humble opinion), Captain Beefheart’s mindblowing Clear Spot.

And The Cradle Will Rock…
Everybody Wants Some!!
Fools
Romeo Delight

Tora! Tora!
Loss Of Control
Take Your Whiskey Home
Could This Be Magic?
In A Simple Rhyme

After two pure party albums, the inevitable had to happen: it was time for Van Halen to mature, or at least get a little serious. And so, Women and Children First, a record where the group started to get heavier, both sonically and, to a lesser extent, thematically, changing the feel of the band ever so slightly.

Where the first two records were nothing but nonstop parties, there’s a bit of a dark heart beating on this record, most evident on the breakneck metal of “Romeo Delight,” but also the pair of opening party anthems, “And the Cradle Will Rock” and “Everybody Wants Some!!,” which don’t fly quite as high as “Dance the Night Away” or “Runnin’ with the Devil” because of the tense, roiling undercurrents in Eddie’s riffs, especially the thudding, circular keyboard riff propelling “And the Cradle Will Rock.”

This is the first Van Halen album to consist entirely of original material and there’s some significant growth here to the writing, evident in the winding, cynical neo-boogie “Fools” and also in the manic “Loss of Control,” which gallops by with the ferocity of hardcore punk. These, along with all previously mentioned songs, are the heaviest music Van Halen has made (or would ever make), but as the album rushes toward the end Diamond Dave pulls them toward his country-blues jive fixation with “Take Your Whiskey Home” and the all-acoustic “Could This Be Magic?” giving the album a dose of levity that is welcome if not necessarily needed.

Then, before the album comes to a close, the band unleashes its first stab at a power ballad with “In a Simple Rhyme,” where the group’s attempts at melodic grace are undercut by their compulsion to rock. This may not make for a full-fledged power ballad, but this tension between the two extremes — by their increasing songcraft and their unhinged rock & roll — makes for dynamic music, and captures all the contrasting glories of the album in one song.