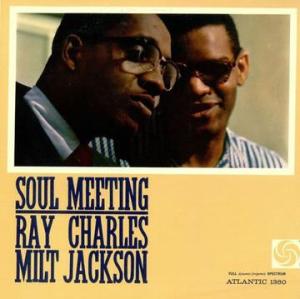 This wonderful pressing has superb sound throughout! It’s EXTREMELY rare to find a stereo copy of this title in anything but beat condition.

This Atlantic pressing has the kind of Tubey Magical Midrange that modern records rarely even BEGIN to reproduce. Folks, that sound is gone and it sure isn’t showing signs of coming back. If you love hearing INTO a recording, actually being able to “see” the performers, and feeling as if you are sitting in the studio with the guys, this is the record for you. It’s what vintage all analog recordings are known for — this sound.

What We’re Listening For on Soul Meeting

Hallelujah I Love Her So
Blue Genius
X-Ray Blues

Soul Meeting
Love On My Mind
Bags Of Blues

NOTE: This review is for the later 2 CD reissue that also includes Soul Brothers.

This brings together all of the extant takes recorded for two albums that Milt Jackson made with Ray Charles for Atlantic in 1957 and 1958. With Oscar Pettiford, Connie Kay, and Kenny Burrell in the various lineups, this is bluesy jazz in a laid-back manner; it surprised many hardcore R&B fans when these albums were originally issued. Jackson moves from vibes to piano, and even guitar (on “Bag’s Guitar Blues”), while Ray jumps between piano and alto sax on these sessions. A rare glimpse of Charles’ jazz soul coming up for air.