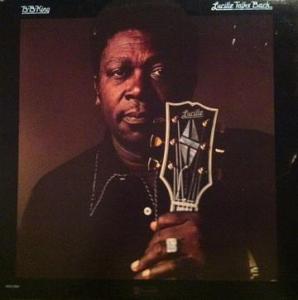 This vintage ABC pressing has the kind of Tubey Magical Midrange that modern records rarely even BEGIN to reproduce. Folks, that sound is gone and it sure isn’t showing signs of coming back. If you love hearing INTO a recording, actually being able to “see” the performers, and feeling as if you are sitting in the studio with King and the band, this is the record for you. It’s what vintage all analog recordings are known for — this sound.

What the best sides of Lucille Talks Back have to offer is not hard to hear:

What We’re Listening For on Lucille Talks Back

LUCILLE TALKS BACK contains what I now come to expect from B. B. King: a superb collection of backing musicians playing at the height of their powers, with the King of the Blues himself front and center, pinging out blue notes from Lucille and singing his heart out. There’s no standout song on here, all of the tracks are great, solid blues numbers.

I’m always impressed by how crafted the music sounds on this album while still managing to feel spontaneous and natural. This is exactly what this sort of jazz/blues music should sound like. The percussion, the horns, the guitar solos, the vocals. Everything just sounds so right in a low-key but effective way. Nobody steps on anyone else’s toes. All the parts fit together perfectly. This may not sound like much of a compliment, but it’s only when you hear talent and skill such as is on display here that you realize how rare it is.

A number of the tracks are live selections, giving the album a good jolt of energy. Don’t get me wrong; the studio recordings here are tight. But there’s just something appealing about hearing a great bunch of musicians performing in front of an appreciative audience. There’s a lot of cheering, hooting, hollering and all kinds of audience participation. Great fun.

…Energy, passion and emotion flow through this album; B. B. King and company make it all sound effortless.