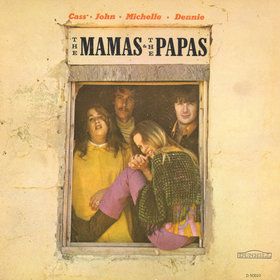 Vintage covers for this album are hard to find in clean shape. Most of them will have at least some ringwear, seam wear and edge wear. Some will have cut corners. We guarantee that the cover we supply with this Hot Stamper is at least VG, and it will probably be VG+. If you are picky about your covers please let us know in advance so that we can be sure we have a nice enough cover for you.

Enough about that stuff. Let’s talk about the sound of the best pressings.

What the best sides of The Mamas & The Papas have to offer is not hard to hear:

Most copies have some congestion and edge to the vocals at least somewhere on each side. The number of bounce downs required to get this complicated music onto a mere four tracks is sizable. Extension on the top end helps to keep the vocals from being gritty and harsh.

Fullness, richness and Tubey Magic will always be in good supply on the best copies. It’s what makes a record sound like a record and not a CD.

That said, clarity and transparency are important too. The best copies really let you hear into the space of the studio. On the super high-definition copies those long reverb trails can really be a kick.

What We’re Listening For on The Mamas & The Papas

No Salt on Her Tail
Trip, Stumble and Fall
Dancing Bear
Words of Love
My Heart Stood Still
Dancing in the Street

Sometimes art and events, personal or otherwise, converge on a point transcending the significance of either — a work achieves a relevance far beyond the seeming boundaries of the creation at hand. During the 1950s and 1960s, in music, it used to happen occasionally for Elvis Presley, the Beatles, and Bob Dylan, once or twice for the Byrds, and a few times for the Beach Boys and the Rolling Stones. For the Mamas & the Papas, it happened twice, with their first album, If You Can Believe Your Eyes and Ears, and, on a more complex level, with this album.