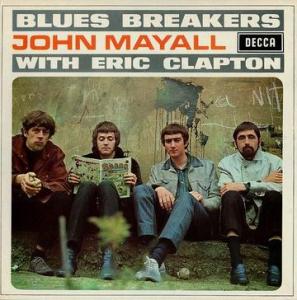 This copy is guaranteed to be clearly superior to virtually all imports, all domestic pressings, whatever crappy Heavy Vinyl they’re making these days — in short, any version of this music on any format that you’ve ever played. This is it folks. They cut this one right and it doesn’t take a pair of golden ears to know it. Blues Breakers finally sounds the way you always wanted it to sound.

We’ve been searching for copies of Bluesbreakers for years — everyone wants a great copy of this Five Star Classic, the only album John Mayall ever made that we would consider a Must Own. After many, many years of experimentation and dozens of copies purchased we’ve finally discovered the British pressings that deliver the best sound we’ve ever heard for this music.

But they don’t come easy and they sure don’t come cheap, so don’t expect the floodgates to open with White Hot Stamper after White Hot Stamper hitting the site. One was it and it will be a year or two at the very least before we have a big enough stack of copies with which to do a shootout fo find another.

Until then this is a great copy that belongs in your collection, and it’s QUIET.

What the best copies of Blues Breakers have to offer is not hard to hear:

A Landmark of British Blues from 1966

This is an Timeless Classic — Allmusic calls it “perhaps the best British blues album ever cut” — and it’s been a drag for years hearing it sound dull, lifeless, bland and small the way it does on so many copies. You may recognize these descriptors for what they are: signs that the pressing is made from a dubbed tape of the master .

Even worse are the versions that are bright, brittle and phony. When you’ve got a lineup like this you need the kind of space and soundstaging separation that lets you appreciate just what each of these guys is doing, instead of the muddled mess that many of us have all but given up trying to enjoy.

To qualify as a Hot Stamper, a must offer the transparency to let listener hear into the music and appreciate how the members of this group are playing as an ensemble to create this exceptionally powerful, moving and timeless music.

Credit engineer (and later producer) Gus Dudgeon with the full-bodied, rich, smooth, oh-so-analog sound of the best copies of Bluesbreakers. He’s recorded or produced many of our favorite albums here at Better Records, most notably the classic Elton Johns from the self-titled album onward. You can find many of them on our site and on our Top 100 list. (One is even a member of our very exclusive Top Ten list, Elton’s Masterpiece, Tumbleweed Connection.

What We Listen For on Blues Breakers

Standing midway between Clapton’s stint with the Yardbirds and the formation of Cream, this album featured the new guitar hero on a series of stripped-down blues standards, Mayall pieces, and one Mayall/Clapton composition, all of which had him stretching out in the idiom for the first time in the studio.

This album was the culmination of a very successful year of playing with John Mayall, a fully realized blues creation, featuring sounds very close to the group’s stage performances, and with no compromises.

Credit has to go to producer Mike Vernon for the purity and simplicity of the record; most British producers of that era wouldn’t have been able to get it recorded this way, much less released. One can hear the very direct influence of Buddy Guy and a handful of other American bluesmen in the playing.