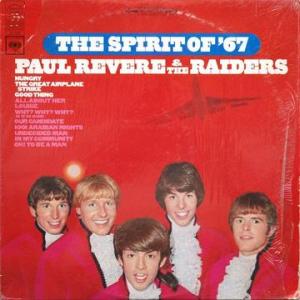 What We Listen For on The Spirit of ’67

Good Thing
All About Her
In My Community
Louise
Why? Why? Why?
Oh! To Be A Man

The Spirit of ’67, Paul Revere and the Raiders’ third gold-selling, Top Ten album to be released in 1966, marked the triumph of the group’s in-house writing team of lead singer Mark Lindsay, Paul Revere, and producer Terry Melcher. “Hungry,” the Top Ten follow-up to “Kicks,” was written, like the earlier hit, by Barry Mann and Cynthia Weil, but Lindsay-Revere-Melcher then hit the Top 40 with “The Great Airplane Strike” and the Top Ten with “Good Thing.” (Actually, Revere was not a writer on “Good Thing,” as subsequent releases indicated.)

Those hits anchored this collection, which was filled out by showcases for bassist Phil Volk and drummer Mark Smith (guitarist Drake Levin had been replaced by Jim Valley), plus some secondary material by the group’s leaders. As usual, they were listening closely to their peers, and much of the material had the twangy guitar-rock sound common to 1966, though some of the experimental eclecticism that would lead to the elaborate productions of 1967’s Sgt. Pepper psychedelic era was also apparent in songs like “Oh! To Be a Man” and “Undecided Man” (the latter a near-copy of the Beatles’ “Eleanor Rigby”). This stylistic trend following did not bode well for the future, but for the moment, Paul Revere and the Raiders were riding high.