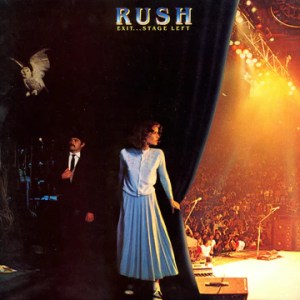 What We’re Listening For on Exit Stage Left

A Passage To Bangkok
Closer To The Heart
Beneath, Between & Behind
Jacob’s Ladder

… the nearly note-perfect performances, combined with exemplary song-selection essentially make Exit…Stage Left a ‘greatest hits’ package from Rush’s best, most-remembered peak, 1977-1981, when they recorded four studio albums culminating in their paragon album, Moving Pictures. The Moving Pictures tour was the right time to capture Rush. Their sound was still hard rock but with a hearty side-dish of prog – a satisfying combination of styles that no other band ever did as well as Rush. Beginning with the next album, Subdivisions, Rush would change their sound to rely more heavily on synthesizers. But at this point the synths were still more of a complementary instrument, and Exit…Stage Left is the sound of Rush as a uniquely-virtuoso 3-piece rock band, and every single song sounds great. ‘Red Barchetta’ in particular is as fantastic in the live document as it is on the studio album.

Also, there are a handful of moments on Exit…Stage Left that make it essential for Rush fans and a treat for listeners being introduced to Rush. Primarily the drum solo in ‘YYZ’, likely the #1 reason Neal Peart is considered by many to be rock’s all-time greatest drummer. Rather than being repetitive, boring, or something that may be nice to listen to once or twice, it ends up being a very fun, 3-minute solo that cements his legacy on rock drumming’s Mt. Rushmore. It is just the right length, well-paced and inventive. Also essential is Alex Lifeson’s gorgeous, classical guitar intro to ‘The Trees’, ‘Broon’s Bane’, a song never recorded for any of their studio albums. This beautiful and memorable intro elevates ‘The Trees’ from a very good song to a highlight of Exit…Stage Left. Another highlight is the crowd singing along with the first verse of ‘Closer to the Heart’ – its just enough reminder that these tight performances are indeed live in concert.

It’s the precision of the performances that makes transitioning from this live album to studio albums easy, and increases its ability to be a fine substitute for a ‘greatest hits’ package. These performances, combined with ideal song selection, and the peak era in which it was recorded, make Exit…Stage Left arguably the best introductory spot for a new listener to Rush who might otherwise be intimidated by the band’s huge output over their 40-year career.

‘Exit…Stage Left’ is the highly-recommended starting point for anyone interested in the music of Rush.