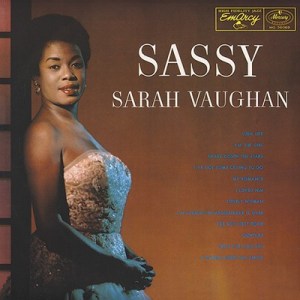 Vintage covers for this album are hard to find in clean shape. Most of them will have at least some amount of discoloration, ringwear, seam wear and edge wear. We guarantee that the cover we supply with this Hot Stamper is at least VG, and it will probably be VG+. If you are picky about your covers please let us know in advance so that we can be sure we have a nice cover for you.

Having done this for so long, we understand and appreciate that rich, full, solid, Tubey Magical sound is key to the presentation of this primarily vocal music. We rate these qualities higher than others we might be listening for (e.g., bass definition, soundstage, depth, etc.). The music is not so much about the details in the recording, but rather in trying to recreate a solid, palpable, real Sarah Vaughan singing live in your listening room. The best copies have an uncanny way of doing just that.

We’ve been fortunate to have a number of excellent sounding Sarah Vaughan records find their way onto our turntable over the course of the last few years, but this will be the first official Sarah Vaughan shootout title to make it to the site.

Most of the reason for this unfortunate fact can be attributed to the lack of clean copies of her prime albums for Mercury (Emarcy being Mercury’s jazz subsidiary) sitting in our local record store bins. Her best albums are either missing or scratched. (Plenty of Pablos and Mainstreams, sure, but we have never been all that impressed with either label’s recordings of vocalists.)

What outstanding sides on Sassy have to offer is not hard to hear:

For our recent shootout, we had at our disposal a variety of pressings we thought would have the potential for Hot Stamper sound. We cleaned them carefully, then unplugged everything in the house we could, warmed up the system, Talisman’d it, found the right VTA for our Triplanar arm (by ear of course) and proceeded to spend the next hour or so playing copy after copy on side one, after which we repeated the process for side two.