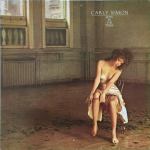 Carly’s soulful version of You Belong To Me is what made this album a Must Own back in the day (and still does). During our shootout, as we listened to the song over and over again on copy after copy, it became clear that the best pressings allowed us to easily hear the drummer’s hi-hat within the dense mix of this heavily produced pop song. On most copies it’s buried and all but inaudible.

If the pressing you own is full-bodied and tonally correct, and you can easily pick out the rhythmic contribution of the hi-hat within the mix, you have a copy with the kind of transparency that few we played managed to achieve.

Transparency (and all the other stuff we talk about) can and does make a big difference in your enjoyment of the music. If the average record sounded even close to right nobody would need us to find good sounding copies for them, copies would be in every record bin in town and we would have to find some other records to sell. Copies of this album may be in every bin in town — that’s where we found this one — but the sound sure isn’t.

When you get a good copy it feels like all these guys and gals are playing together live in the studio.  They may have their own mics, and they are certainly being placed artificially in the soundfield to suit the needs of the track (piano over here, guitar over there, drummer behind the singer), but the transparency of the better pressings makes them sound like they are all in the same room performing together.

And without the very best cleaning technologies, the ones invented only recently as a matter of fact, there is no chance of achieving the kind of transparency our best copies have. We consider it one of the most important Revolutions in Audio of the last twenty years. If you want your records to sound their best, we would love to help you do it.

Last time we played one we said, “I dropped the needle on this record and the sound was very transparent and sweet. Probably quite a bit better than the average American copy.”

This is the most you can hope for with even the best Half-Speeds: transparency, and maybe freedom from distortion. The sound will almost always be compressed and lifeless, a mere ghost of the real thing, which means that the emotional weight of the music will be missing, and when that goes, so goes the reason to be playing the album.

Simon reached the Top Ten with “You Belong To Me,” a collaboration with Michael McDonald that showed both off at their best, and the album’s other Top 40 single was another duet with husband James Taylor on the old Everly Brothers hit “Devoted To You.