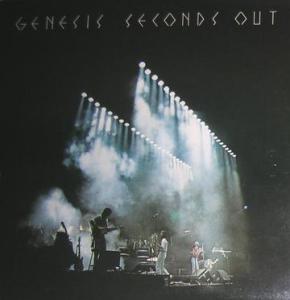 This vintage British Charisma pressing has the kind of Tubey Magical Midrange that modern records can barely BEGIN to reproduce. Folks, that sound is gone and it sure isn’t showing signs of coming back. If you love hearing INTO a recording, actually being able to “see” the performers, and feeling as if you are sitting in the studio with the band, this is the record for you. It’s what vintage all analog recordings are known for — this sound.

What We’re Listening For on Seconds Out

Depending upon your point of view, Genesis in 1976/1977 was either a band ascending toward its peak commercially, or a group crippled by the departure of a key member, and living on artistic borrowed time. In reality, they were sort of both, and fortunately for the members, their commerciality was more important than their artistic street cred, as their burgeoning record sales and huge audiences on tour during that period attested. Seconds Out caught the band straddling both ends of their history, their second concert album and this time out a double LP.Apart from capitalizing on a successful tour, the album’s raison d’etre appears to have been to present the case to critics and longtime fans that post-Peter Gabriel Genesis, with Phil Collins as lead singer, was essentially the same band as Genesis fronted by Peter Gabriel.

The original side one songs consisted of repertory from such post-Gabriel albums as Trick of the Tail and Wind & Wuthering, and most of those live versions, including “Squonk,” “The Carpet Crawl” (positively ethereal), and “Afterglow,” are superior to the original studio renditions of the same songs. Indeed, part of the beauty of this album is the sheer flexibility of the band during this period — in addition to superb vocals by Collins throughout, the drumming by Chester Thompson is at least a match for Collins’ best playing.

On that older repertory (which comprised sides two and three of the LP version), the results are more mixed, though still surprisingly enjoyable — on “The Lamb Lies Down on Broadway,” despite the best efforts of Collins, backed by Michael Rutherford’s and Tony Banks’s singing, he really can’t match the subtlety or expressiveness of Gabriel’s singing, though he comes close; he actually fares slightly better on the closing section of “The Musical Box,” a piece that requires power as much as subtlety. “Supper’s Ready” — which, sung by Gabriel, missed making it onto 1973’s live album — holds up well, mostly by virtue of the playing; and in fairness, the band even extended itself to including “Cinema Show,” which is worth hearing just for Bill Bruford’s transcendent drumming, over and above how well everything else works; as this track was never represented with Gabriel, even on the group’s boxed set, it’s difficult to complain too loudly about any weakness in Collins’ singing.