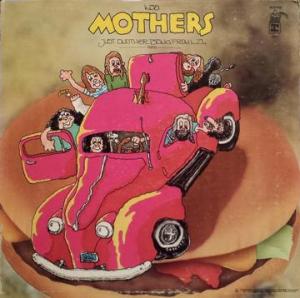 This vintage Bizarre pressing has the kind of Tubey Magical Midrange that modern records can barely BEGIN to reproduce. Folks, that sound is gone and it sure isn’t showing signs of coming back. If you love hearing INTO a recording, actually being able to “see” the performers, and feeling as if you are sitting in the studio with the band, this is the record for you. It’s what vintage all analog recordings are known for — this sound.

What The Best Sides Of Just Another Band From L.A. Have To Offer Is Not Hard To Hear

The master tapes of the UCLA Pauley Pavillion concert were made on a portable Scully 4-track machine at 15 ips, and the master mixes derived therefrom are “real stereo.” – Frank Zappa

I’m really proud of this recording. I recorded the band using just two microphones. Instead of using dozens of mics, I set the mix using the volume controls of the band’s instrument amplifiers. I told them if they needed to hear their instrument with more volume, they had to call in a roadie and have their amplifier moved higher or closer to them. The point was, if they turned up their amp, the album would be ruined. They trusted me completely. As a result, the album’s sound is their sound—not a studio mix. I recorded direct to a four track. Frank and I then simply mixed 4-to-2 at Ike Turner’s “Bolic Sound” studio in Inglewood. That was some night. I’m sure all of us remember it well.Frank was still recovering from his injuries from the mishap at the Rainbow Theater in London. With a broken leg, I was transporting him to the studio on a mattress I’d put in the back of my ’47 Chevy panel truck. […] I moved him from the Chevy to his wheelchair and rolled him into the recording studio to supervise as I mixed Just Another Band From LA.

The four tracks we had were stage left, stage right, vocals and one track of room sound (recorded by a KM86 at stage center, facing away from the stage). I put the room sound mono track thru a mono-to-stereo converter, mixed in the band and vocals and we were done. We then ran the whole show thru this system onto a 2-track. This was mastered into the Just Another Band From LA album. Easy as pie.

What We’re Listening For On Just Another Band From L.A.

Call Any Vegetable
Eddie, Are You Kidding?
Magdalena
Dog Breath