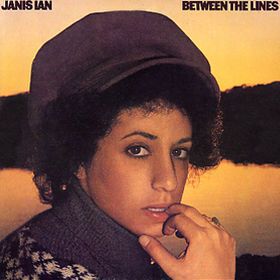 Take this one home and check out how warm and natural the acoustic guitars sound throughout, free from the grain and edge that plague the typical copy. Play At Seventeen and listen to how clear and present Ian’s vocals sound, with the kind of breath and body that you’d hear in a live performance.

This vintage Columbia LP has the kind of Tubey Magical Midrange that modern pressings barely BEGIN to reproduce. Folks, that sound is gone and it sure isn’t showing any sign of coming back.

Having done this for so long, we understand and appreciate that rich, full, solid, Tubey Magical sound is key to the presentation of this primarily vocal music. We rate these qualities higher than others we might be listening for (e.g., bass definition, soundstage, depth, etc.). The music is not so much about the details in the recording, but rather in trying to recreate a solid, palpable, real Janis Ian singing live in your listening room. The best copies have an uncanny way of doing just that.

If you exclusively play modern repressings of older recordings (this one is now almost 50 years old), I can say without fear of contradiction that you have never heard this kind of sound on vinyl. Old records have it — not often, and certainly not always — but less than one out of 100 new records do, if our experience with the hundreds we’ve played can serve as a guide.

Most copies of this album have that ’70s Red Label Columbia sound I imagine most of you know pretty well by now — dry, grainy and flat. If you’ve been in this hobby for a good amount of time, you know as well as I do that there are magical pressings from this era to be found but they are few are far between. You’d have to get your hands on quite a few copies of this album to have a decent chance of finding one with two sides this good!

What We’re Listening For On Between the Lines

Recently we did one a shootout for Between the Lines, using mostly original pressings we know from experience to have the potential for Hot Stamper sound. We cleaned them as carefully as we always do. Then we unplugged everything in the house we could get away with, carefully warmed up the system, Talisman’d it, found the right VTA for our Triplanar arm (by ear of course) and proceeded to spend the next couple of hours playing copy after copy on side one, after which we repeated the process for side two.

This is Janis Ian’s second album from her re-emergence in the early to mid-’70s as one of the genre’s most inspired and original singer/songwriters. While this title houses Ian’s biggest international hit, the confessional “At Seventeen,” the entire effort combines her honest and confessional lyrics with an equally engaging blend of pop/rock and definite jazz and blues. This album is a recommended starting point for potential enthusiasts, as well as a touchstone to be repeatedly revisited.