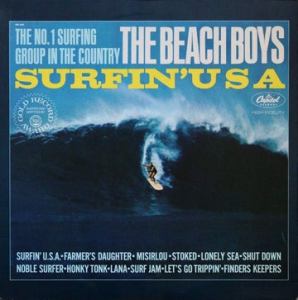 NOTE: Vintage covers for this album are hard to find in clean shape. Most of them will have at least some amount of ringwear, seam wear and edge wear. We guarantee that the cover we supply with this Hot Stamper is at least VG, and it will probably be VG+. If you are picky about your covers please let us know in advance so that we can be sure we have a nice cover for you.

It’s hard to find great sounding Beach Boys records, so when we first heard a Hot Stamper of this title we were blown away. The sound is big, open, rich and full, with the performers front and center (as well as left and right). The highs are extended and silky sweet. The bass is tight and punchy. And this copy gives you more life and energy than others by a long shot

What We’re Listening For on Surfin’ USA

The real breakthrough, as Brian Wilson asserts himself in the studio as both songwriter and arranger on a set of material that was much stronger than Surfin’ Safari. Besides the hit title track and its popular drag-racing flip side (“Shut Down”), this has a lovely, heartbreaking ballad (“Lonely Sea”) and a couple of strong Brian Wilson originals (“The Noble Surfer” and “Farmer’s Daughter”).

There are also a surprisingly high quotient of instrumentals (five) that demonstrate that, before session musicians took over most of the parts, the Beach Boys could play respectably gutsy surf rock as a self-contained unit. Indeed, the album as a whole is the best they would make, prior to the late ’60s, as a band that played most of their instruments, rather than as a vehicle for Brian Wilson’s ideas. The LP was a huge hit, vital to launching surf music as a national craze, and one of the few truly strong records to be recorded by a self-contained American rock band prior to the British Invasion.