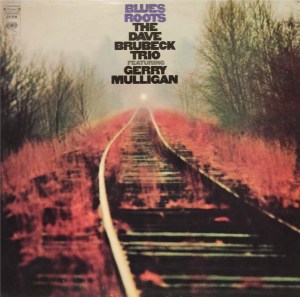 A very different quartet appears on this record, with Mulligan’s baritone sax replacing Desmond’s alto and a whole new rhythm section behind both of these veteran leaders.

We’ve been surprised how good these mid- to late-’60s Brubeck recordings can sound. There’s still plenty of Tubey Magical richness on the best pressings of these records, a quality that is especially important when trying to reproduce the full-bodied sound of a baritone sax.

This copy gets that sound right like no other we have ever put on the site, and does a great many other good things as well.

Although this is a blues-oriented set, there is plenty of variety in tempos and grooves. The 1968 Quartet featured the leader/pianist, baritonist Gerry Mulligan, bassist Jack Six and drummer Alan Dawson. The repertoire on this LP ranges from “Limehouse Blues” (which is not really a blues) to “Things Ain’t What They Used to Be” and several originals.

Listening to several unidentified pianists in a Down Beat blindfold test, Willie “The Lion” Smith picked Brubeck as the best blues player of the bunch.

“I like the piano [player],” Smith told Leonard Feather, “because he plays like the guys I told you about at the brickyards in Haverstraw, New York, where the blues was BORN …. He has heavy hands, but hits some beautiful chords… You could put this on at anybody’s house, and they’d dance all night.”