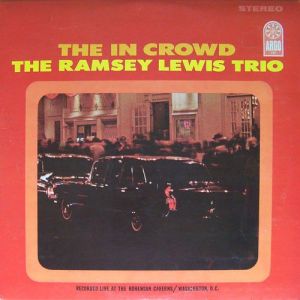 This original Cadet Stereo pressing has the kind of Tubey Magical Midrange that modern records cannot even BEGIN to reproduce. Folks, that sound is gone and it sure isn’t showing signs of coming back. If you love hearing INTO a recording, actually being able to “see” the performers, and feeling as if you are sitting in a real jazz club, this is the record for you. It’s what Vintage Records are known for — this sound.

What is lost in these newly remastered recordings? Lots of things, but the most obvious and bothersome is TRANSPARENCY. And the loss of transparency in a live jazz club recording is practically the kiss of death.

What both sides of this pressing have to offer is not hard to hear:

This album is more common in mono than stereo, but we found the sound of the mono pressing we played unsatisfying. Where is the wall to wall space of the live club? It has been drastically shrunken into the area between the speakers. Much of the ambience disappeared with it, destroying the illusion the album was trying to create, that you are there.

In mono, you really aren’t.

Ramsey Lewis staked his claim to fame with The In Crowd, an instrumental version of Dobie Gray’s Top 40 hit. He also was one of the first soul jazz icons of the mid-’60s, based on the strength of the sales of this recording, done over three days during a club date at the Bohemian Caverns in Washington, D.C.

What is not readily acknowledged over the years is that bassist Eldee Young is really the star of the show. He’s the one who gets the crowd revved up with his vocalizing in tandem with the notes he is playing.

The album also received a Grammy Award in 1966 for Best Instrumental Jazz Performance by an Individual or Group and the single was inducted into the Grammy Hall of Fame in 2009.

AllMusic awarded the album 4½ stars stating “this is the moment where Lewis shined the brightest, the “in crowd” at the club was verbally into it, and the time for this music was right.”

Fifty years ago, the Ramsey Lewis Trio sat in a Washington, D.C. coffee shop, musing over what it could add to its set that evening. It was booked for a run at Bohemian Caverns — the group had issued a live album made at the nightclub, and it was gearing up to record a follow-up live album. Over walked a waitress, who inquired about the band’s predicament.

“She had a jukebox,” Lewis says. “Jukeboxes in coffee shops — people don’t know about that any more, but she went over to the jukebox and played: ‘You guys might like this! Listen to this!'”

Her recommendation was “The In Crowd,” sung by Dobie Gray — a popular hit at the time. Lewis and the band worked out an arrangement quickly, then ended their set with it that evening, to wild applause.

“If somebody had come up with another song that fit the style of what we wanted, there would not have been an ‘In Crowd,’ ” he says.

Lewis, now 79 [in 2015] and still actively performing, spoke with NPR’s Arun Rath about how the song came to be.