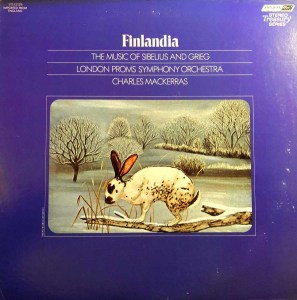 A shocking Stereo Treasury sleeper with a superb Shaded-Dog-beating side one. Side one is nearly White Hot – it’s exceptionally transparent and dynamic. Real Demo Disc sound and music on side one – spectacular works played with feeling.

This is yet another wonderful example of what the much-lauded Decca recording engineers were able to capture on analog tape all those years ago. The 1960 master has been transferred brilliantly using “modern” cutting equipment (from 1970, not the low-rez junk they’re forced to make do with these days), giving you, the listener, sound that only the best of both worlds can offer.

More spacious than practically any other copy we heard thanks to an extended, correct top end.

This side was also very dynamic, and it gets loud in the right way, never harsh or screechy.

Correct from top to bottom, and there are not many records we can say that about. So natural in every way.

The brass is HUGE and POWERFUL on this side. Not many recordings capture the brass this well. (Ansermet on London comes to mind of course but many of his performances leave much to be desired. Here Mackerras is on top of his game with performances that are definitive.)

The brass is big and clear and weighty, just the way it should be, as that is precisely the sound you hear in the concert hall, especially that part about being clear: live music is more than anything else completely clear. We should all strive for that sound in our reproduction of orchestral music.

Good clarity and top extension, with full-bodied, textured strings. Gets a little hot at its loudest but manages to stay under control and enjoyable throughout.

You can be pretty sure of two things when you hear a record of this quality: one, the original probably won’t sound as good, likely having been cut on cruder equipment.

And two, no modern recutting of the tapes (by the likes of Speakers Corner for example, but you can substitute any company you care to name) could begin to capture this kind of naturalistic orchestral sound.

I have never heard a Heavy Vinyl pressing begin to do what this record is doing. The Decca we have here may be a budget reissue pressing, but it was mastered by real Decca engineers (a few different ones in fact), pressed in England on high quality vinyl, and made from fairly fresh tapes (nine years old, not fifty years old!), then mastered about as well as a record can be mastered.

The sound is, above all, REAL and BELIEVABLE.

None of the Shaded Dog pressings we’ve played in the last few years had the White Hot Stamper sound of our best Londons and Deccas. The top didn’t open up as much as we would have liked and there tended to be more compression and congestion in the climaxes. If we had ten RCA LPs to play perhaps some better copies would have turned up. Considering the cost of clean Living Stereo pressings these days that’s simply not a shootout we can afford to do, given the number of noisy and/or mediocre sounding pressings we would be sure to discover (and then have to eat).

Classic Records, as should not surprise anyone, completely ruined the album. Their version is dramatically more smeared and low-rez than our Hot Stamper Shaded Dogs, with almost none of the sweetness, richness and ambience that the best RCA pressings have in such abundance.

In fact their pressing is just plain awful, like most of the classical recordings they remastered, and should be avoided at any price. If you’re tempted to pick one up for a few bucks to hear how badly mastered their version is, go for it. If you actually want a record to play for enjoyment, don’t bother — it’s a complete waste of money.

Most audiophiles (including audiophile record reviewers) have never heard a classical recording of the quality of a good original pressing (or good ’60s or ’70s reissue). If they had Classic Records would have gone out of business immediately after producing their first three Living Stereo titles, all of which were dreadful and characterized as such by us way back in 1994.

I’m not sure why the rest of the audiophile community was so easily fooled (to this very day! There are dozens on the TAS List for Pete’s sake), but I can say that we weren’t, at least when it came to their classical releases. (We do admit to having made plenty of mistaken judgments about their jazz and rock records, and we have the We Was Wrong entries on the site to prove it.)

The Search for Finlandia

On a well-known work such as this we started by pulling out every performance on every label we had in our backroom and playing them one after another. Most never made it to the half-minute mark. Sour or thin brass on the opening salvo of Finlandia? Forget it; onto the trade-in pile you go.

(If you have too many classical records taking up too much space and need to winnow them down to a manageable size, pick a composer and play half a dozen of his works. Most classical records display an irredeemable mediocrity right from the start; it doesn’t take a pair of golden ears to hear it. If you’re after the best sound, it’s the rare record that will have it, which makes clearing shelf space a lot easier than you might imagine. If you keep more than one out of ten you’re probably setting the bar too low if our experience is any guide.)

A few days went by while we were cleaning and listening to the hopefuls. We then proceeded to track down more of the pressings we had liked in our preliminary round of listening. At the end we had a good-sized pile of LPs that we thought shootout-worthy, pressings that included Shaded Dogs, Deccas, Londons, Stereo Treasury’s and Victrolas — representing most of our favorite labels from the Golden Age.

This Decca took the top prize. It beat every recording on every pressing we could get our hands on to throw at it. That’s our shootout in a nutshell.