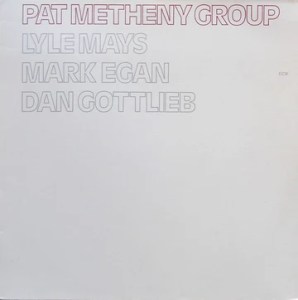 This WHITE HOT Stamper of arguably his best album lets the music come to LIFE in a way that no other pressing in our shootout managed to do. We don’t know how you feel about ECM recordings in general, but we tend to think they are pretty lifeless and boring.

This is the sound of the Master Tape — worlds better than what most record lovers have ever had the privilege of hearing. If you want to know how good this album can sound, it’s first come, first served. There’s only one, folks, and this is it.

This copy has more of the clarity, energy and dynamics than any pressing of the album you have ever heard, guaranteed. Where is the muck? The blurry bottom end? The smear? All gone.

And the bass is monstrous. Finally the kick drum is really kicking, breaking through the mix.

Lively and fun, who knew any Pat Metheny album could sound like this?

If you’re a fan of this Five Star album, this copy will show you what you’ve been missing all these years — the kind of sound that gets the music right.

What We’re Listening For On Pat Metheny Group

The first recording by the Pat Metheny Group features the innovative guitarist along with keyboardist Lyle Mays, bassist Mark Egan, and drummer Dan Gottlieb. The music is quite distinctive, floating rather than swinging, electric but not rockish, and full of folkish melodies. The best known of these six Metheny-Mays originals are “Phase Dance” and “Jaco.” This music grows in interest with each listen.

Despite the common description of Metheny’s music as “fusion,” it was always his intention to create improvised music that had a greater emphasis on bringing out harmony than anything common to what was called “fusion” of the time.

Pastorius, with whom Metheny struck up a friendship while the two attended the University of Miami and later toured in Joni Mitchell’s backing band during her transition from her earlier folk rock compositions to those with more jazz influence, had at the same time explored melodic lines for his instrument within the melodies normally heard, rather than just providing a simple bassline, revolutionizing the way the bass guitar was viewed by the musical establishment. The two friends would talk into the late evening during the early 1970s and discuss the new possibilities their instruments held.

At the same time, Jaco and I were both really on a mission to find a way to play and find a way to present our instruments in an improvisational environment that expressed our dissatisfaction with the status quo at the time.

In 1977, bassist Mark Egan joined Metheny, Mays, and Gottlieb to form the Pat Metheny Group. They released the self-titled album “Pat Metheny Group” in 1978 on the ECM label, which featured several songs co-written by Metheny and Mays. The group’s second album, American Garage (1979), was a breakout hit, reaching #1 on the Billboard Jazz chart and crossing over to the pop charts as well, largely on the strength of the up-tempo opening track “(Cross the) Heartland” which would become a signature tune for the group. The group built upon its success with lengthy tours in the USA and Europe.

The group featured a unique sound, particularly due to Metheny’s Gibson ES-175 guitar coupled to two digital delay units and Mays’ Oberheim synthesizer and Yamaha Organ. The group played in a wide range of styles from experimental to grassroots music. Later on, Metheny began working with the Roland GR300 guitar synthesizer and a Synclavier System, while Mays expanded his setup with a Prophet 5 synthesizer designed by Sequential Circuits, and later with many other synthesizers.