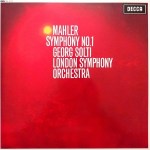 More of the Music of Gustav Mahler

Probably one of the better Speakers Corner Decca reissues.

It was recorded in Kingsway Hall early in 1964, so it already had a lot going for it.

We haven’t played a copy of this reissue in years, but back in the day (1996 or thereabouts) we liked it, so let’s call it a “B” with the caveat that the older the review, the more likely we are to have changed our minds.

Obviously we can’t be sure we would still like it, and it’s very unlikely we would like it as much as we used to, but it’s probably a good reissue at the price, assuming the price is around $30.

As the years went by, we started to notice more and more problems with these pressings, and some time in the early 2000s we wrote about them in a commentary we called: The sonic signature of the modern Heavy Vinyl Classical Reissue in Four Words: Diffuse, Washed Out, Veiled, and Vague.