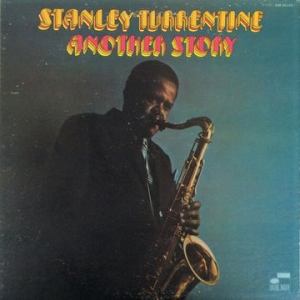 This vintage Blue note pressing has the kind of Tubey Magical Midrange that modern records can barely BEGIN to reproduce. Folks, that sound is gone and it sure isn’t showing signs of coming back. If you love hearing INTO a recording, actually being able to “see” the performers, and feeling as if you are sitting in the studio with the band, this is the record for you. It’s what vintage all analog recordings are known for — this sound.

What the best sides of Another Story have to offer is not hard to hear:

What We’re Listening For on Another Story

Get It
The Way You Look Tonight
Stella By Starlight

A legend of the tenor saxophone, Stanley Turrentine was renowned for his distinctively thick, rippling tone, an earthy grounding in the blues, and his ability to work a groove with soul and imagination. Turrentine recorded in a wide variety of settings, but was best-known for his Blue Note soul-jazz jams of the ’60s, and also underwent a popular fusion makeover in the early ’70s.

Born in Pittsburgh on April 5, 1934, Turrentine began his career playing with various blues and R&B bands, with a strong influence from Illinois Jacquet. He played in Lowell Fulson’s band with Ray Charles from 1950-1951, and in 1953, he replaced John Coltrane in Earl Bostic’s early R&B/jazz band. After a mid-’50s stint in the military, Turrentine joined Max Roach’s band and subsequently met organist Shirley Scott, whom he married in 1960 and would record with frequently.

Upon moving to Philadelphia, Turrentine struck up a chemistry with another organist, Jimmy Smith, appearing on Smith’s 1960 classics Back at the Chicken Shack and Midnight Special, among others. Also in 1960, Turrentine began recording as a leader for Blue Note, concentrating chiefly on small-group soul-jazz on classics like That’s Where It’s At, but also working with the Three Sounds (on 1961’s Blue Hour) and experimenting with larger ensemble settings in the mid-’60s.

As the ’70s dawned, Turrentine and Scott divorced and Turrentine became a popular linchpin of Creed Taylor’s new, fusion-oriented CTI label; he recorded five albums, highlighted by Sugar, Salt Song, and Don’t Mess With Mister T. While those commercially accessible efforts were artistically rewarding as well, critical opinion wasn’t as kind to his late-’70s work for Fantasy; still, Turrentine continued to record prolifically, and returned to his trademark soul-jazz in the ’80s and ’90s