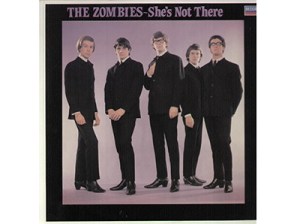 Classic Tracks: “She’s Not There, The Zombies

If one of the defining characteristics of a Classic Track is its immediate recognition, then The Zombies’ “She’s Not There” is as classic as it comes. One of its atypical characteristics, the distinctive opening bass notes and subsequent line that continues throughout the track, surely helped the band win the 1964 Hert’s Beat Competition, which earned them a recording contract with Decca Records. On the map and on their way.

The band had gotten together when they were 15-year-old schoolmates in 1961 in their hometown of St. Albans, England. Keyboardist Rod Argent recruited some of the members, as lead vocalist Colin Blunstone remembers, based on the alphabet. “We sat in class in alphabetical order, and I had a guitar,” Blunstone recalls.

Then after they won the competition, according to Blunstone, and just two weeks prior to their big recording session, producer Ken Jones said, “You could always try to write something.”

“We were going to just do covers,” Blunstone says. “After he suggested that, right away we started talking about other things and I forgot all about it, but two days later, Rod Argent came back and he had written ‘She’s Not There.’ Even I thought, ‘This song is remarkably good.’”

It was only the third song Argent had ever penned (bassist Chris White wrote what turned out to be the B-side, “You Make Me Feel Good”), and the minor chords of “She’s Not There” were inspired by Argent’s love of jazz. He wrote that opening bass downbeat into the song for White to play, just as he wrote the infectious catchy bass line that is integral to the composition.

“It was part of what I originally played around the chord sequence at the beginning of the verses,” Argent explains. “I said to Chris [White], ‘Can you play this please?’” Argent also wrote the signature hooky drum part into the song as well, which he says original drummer Hugh Grundy “played great.” “And then in the next section, that was all Hugh,” Argent says. “It was the opening bass and drum riff that I wrote.

“Around that time I had been turned on by the Miles Davis Group with John Coltrane and Cannonball Adderley, and occasionally Bill Evans,” he says. “The first album of Miles Davis’ that I really adored was Milestones with Red Garland on it. I didn’t know at that time what modal music was, but I imbibed so much of what Miles was doing at the time, some of those elements, quite unconsciously, came out in the writing of those early songs.”

Argent says that years later, when he met Pat Metheny, Metheny remarked about the “wonderful modal stuff” on “She’s Not There.”

“I thought, ‘There’s no modal stuff on there,’ but I went back and started playing it and thought, ‘You know what? He’s right.’” Argent laughs. “Whereas I thought the first two chords were A minor to D major, the way I actually played the chords, I played a little motif over it, which was actually a very modal motif and it was just unconscious.”

Before realizing that, though, Argent had wanted to start the verse with a minor chord and had an idea of having the song in three sections, which actually goes into a major chord and ends on a minor chord.

His keyboard solo was also jazz influenced, which Argent says the Byrds once told him in turn influenced “Eight Miles High.”

“They told me that [the solo] made them realize they could put jazz-inflected music on a rock ’n’ roll record,” Argent says. “But at the time, I didn’t think of it as jazzy. I thought I was writing a Beatles song. Once it goes through your own filter, all these other things come out. But right from the beginning of The Zombies, even when we were just semi-pro, and even before we had heard anything of the Beatles, two things happened: We always experimented with harmony, which was unusual for rock ’n’ roll at that time, and I was always interested in improvising solos.”

In fact, at the contest where the band scored that Decca contract, they played the classic “Summertime,” on which Argent played an extended solo.

Argent confesses that he knew nothing about songwriting when he wrote “She’s Not There,” but realizes that may have been why the song was such a success.

“I remember saying to Colin [Blunstone] that you only have the naiveté and arrogance of youth once,” he says. “When our producer said, ‘Why don’t you try to write something for the session,’ I thought, ‘Yeah, I can write something that’s as good as the Beatles and Colin will sound great singing it and it will be a Number One record.’ It’s because you have absolutely no knowledge of everything that can go wrong and how everything has to happen just right for it all to work. And it was just so lucky. Colin was great singing it.”

And yes, some things went wrong, but turned out all right at the session—their very first, still only 18 years old—the most prominent being that engineer Terry Johnson had been to a wedding before he showed up at the studio, intoxicated.

“He started insulting us as we were recording,” Argent recalls, laughing. “We were doing ‘You Make Me Feel Good,’ and I sorta went ‘mmmm’ at one point, and he started yelling, ‘If you’re going to f***ing “mmmm,” we’re not going to do it, and don’t just stand there like a wuss,’ and I thought, ‘Oh my God, what’s going on?’ Colin was saying to me, ‘If this is being a professional musician, I don’t think I want to know.’”

As luck would have it, Johnson passed out.

As luck would have it, the assistant engineer, also on his first-ever session, was the now-legendary Gus Dudgeon, who supervised a date that included the recording of “Summertime,” “It’s Alright With Me,” “You Make Me Feel Good” and “She’s Not There.”

“We would record the backing track first, on two tracks—that would be the keyboards, the bass, drums and guitar,” Argent remembers. “And then we would do the lead vocal on a separate track. We would do the harmonies at the same time, but on their own track.”

Argent says that he is pretty sure they used a Neumann U 47 tube microphone on the vocal. The electric piano was a Hohner Pianet.

“The original version of the Pianet was brilliant, but it had a limited life because there were little sticky pads, and when you pressed the key down, the little sticky pad came off and eventually the little metal thing would break away from the sticky pad and go ‘boing,’” Argent explains. “As you can imagine, that stickiness had a limited life. They had later versions that were more reliable but never quite had the same sound. I loved that Pianet. It had a very biting, groovy sound to it. Manfred Mann was the other guy who used one of those at the time.”

Argent doesn’t recall how many takes they did on “She’s Not There,” but guesses that it was probably about three or four. “All four tracks would have been recorded in a three-hour session,” Argent says.

Ultimately, a sobered-up Johnson mixed the record. “I didn’t realize until recently that Terry Johnson must have come back the next day, so he had a lot to do with how that record sounded. Hats off to him because it was a terrific-sounding record.”

It has annoyed Argent over the years that today the stereo remix gets played more than the original mono recording. Both versions are on The Zombies box set, Zombie Heaven.

“As it was being mixed, we were able to add a little drum part, so it made it sound a lot better,” Argent says. “At the time there were only four tracks. You could go the extra track because when you reduced the four down to one track, you could add another part, so we added a little drum overdub, which made all the difference, which was on the original mono hit. And to my ears, that mono hit sounds miles better than any subsequent stereo mix that has happened, yet the only thing you ever hear these days is the stereo remix. It’s such a shame.”

After the band recorded, Argent says they weren’t allowed into the studio again.

“Ken Jones was a very autocratic, old-school producer,” Argent says. “In the end, that’s what became unacceptable to us. Ken did a wonderful job on ‘She’s Not There’ and was a talented guy,” Argent says, adding that the producer passed away a number of years ago.

One thing that definitely went right was that George Harrison was on the panel of judges on UK’s most influential program, called Jukebox Jury.

“They played about one-and-a-half or two minutes of each song and the panel decided if it would be a hit or a miss,” Argent says. “We managed somehow to get it on the show, and that night George Harrison was on the show and at that time, any one of the Beatles was gold. He didn’t like any of the previous records, but he was hugely complimentary of ‘She’s Not There,’ and I’m sure that was the biggest piece of timing and luck.”

“She’s Not There” hit Number 12 in the UK, but went all the way to Number 2 in the U.S. Hearing it for the first time on the radio, Argent says, was magical.

“I heard it the first time on Radio Luxembourg, which was the only commercial station you could get in England because it came from Luxembourg and it was broadcast on medium wave,” he remembers. “The signal would come and go and there were all sorts of crackles on it and it would fade in and out, but somehow that added to the magic of it, so it sounded like it was coming from a slightly different universe. Hearing that for the first time was absolutely magical. I remember it very well. It felt fantastic.”