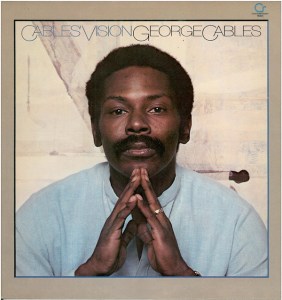 This Contemporary pressing has wonderful sound. This should not be too surprising as it was recorded by one of our favorite engineers, Allen Sides, working out of his Oceanway studios. (Supposedly he is a big fan of vintage mics and the like. with many superb and valuable examples.)

On top of that the album was mastered by Bernie Grundman, who was at the time still cutting very good sounding records, this being 1980. Since then he has gone precipitously downhill, as we have noted on the site numerous times.

This is the man who cut some of the best sounding records I have ever played, including many of the best Contemporary recordings, but his work in recent decades has left much to be desired. He sure has fooled a lot of audiophile record reviewers, but not us I venture to say. We never jumped on the Classic Records bandwagon, and to this day we cannot understand how any critical listener could be fooled by the countless Heavy Vinyl mediocrities that label put out.

You can say the same thing for Doug Sax, a man whose work took a turn for the worse long ago. The sad reality is that the dull, thick, lifeless, veiled, ambience-free records he cut for Acoustic Sounds and Klavier in the ’90s were no worse than the dreck being made today. The more things change…

On this pressing you will find the patented big bottom end that Allen Sides is known for, with real dynamics and 3-D studio sound. Add to each of those naturally correct timbres and you have one excellent recording. It reminds me very much of a good Joe Sample record.

This is a pop-jazz album. Most of the time it may not be especially deep, but it’s not trying to be. It is what it is – sophisticated, melodic, well-crafted piano- and vibes-based jazz. With the awesome Freddie Hubbard on trumpet.

There is one true bop tune on the album, there to show that these guys can play the real thing when they want to. But that’s not really what they are going for, and this kind of fun jazz is harder to find than bop jazz anyway, so enjoy it for what it is. AMG gives it a rave 4 1/2 Star review and I agree with practically every word.

What the best sides of Cables’ Vision have to offer is not hard to hear:

This vintage Contemporary pressing has the kind of Tubey Magical Midrange that modern records rarely even BEGIN to reproduce. Folks, that sound is gone and it sure isn’t showing signs of coming back. If you love hearing INTO a recording, actually being able to “see” the performers, and feeling as if you are sitting in the studio with the band, this is the record for you. It’s what vintage all analog recordings are known for — this sound.

What We’re Listening For on Cables’ Vision

Morning Song
I Told You So
Byrdlike

One of the most satisfying recordings to be released in 1980…, this date by pianist George Cables (who contributed four of the six group originals) features trumpeter Freddie Hubbard (who brought in “Byrdlike”) and tenor saxophonist Ernie Watts in fiery form; the two horn players took time off from their much more commercial efforts for other labels.

Vibraphonist Bobby Hutcherson is also in the sextet/septet with bassist Tony Dumas, drummer Peter Erskine, and sometimes percussionist Vince Charles; the one departure is “The Stroll,” which is an adventurous piano-vibes duet by Cables and Hutcherson. The solos overall are concise and make expert use of each note. Cables’ tunes (including “Morning Song,” “I Told You So,” and “Inner Glow”) are generally catchy and memorable while “Byrdlike” gives the virtuosos an up-tempo blues to romp through.

This logically conceived and well-paced set is a gem that is highly recommended.