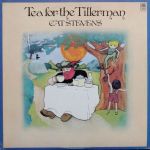 We’ve learned a lot about this record in the last thirty years or so. Here is what we thought we knew back in 2004.

This is a superb sounding original Brown Label A&M pressing. If you didn’t know better you might think you were listening to a Pink Label copy: it’s that good! In fact, having just played a Pink label Island 3U/3U original, I’m going to say that this pressing actually sounds better on side one than that famous import. This will no doubt shock many of you. But I have known of a better sounding brown label domestic pressing for close to 10 years.

But what surprised me in this case was that these particular stampers are different from the domestic original that I discovered all those years ago. This is an entirely new finding. Dropping the needle on side one of this record and hearing the delicate strumming of the guitar and the smoothness and sweetness of the vocals, I knew immediately that I was hearing a Hot Stamper. A VERY Hot Stamper. Listening to it all the way through a few times and playing some other copies convinced me that indeed it was As Good As It Gets. On side one anyway.

Side two is excellent, but the bass is not quite as well defined and there is a slight loss of transparency in comparison to the best copies I have heard. The song Father and Son can be a bit sibilant. On the ultimate copies the sibilance is under control. This one has a little more of that sibilance than the best stampers I have heard. It’s not bad, but it’s not the equal of the best pressings.

Another track I like to play on side two is Into White. With this song, you hear into the music on the best copies as if you were seeing the live musicians before you. The violinist is also a key element. He’s very far back in the studio. When he’s back where he should be, and the sound of the wood of his violin and the rosin on the strings is still clearly audible, without any brightness or edginess to artificially create those details, you know you are hearing the real thing.

This is, I hope it goes without saying, one of the greatest rock records of all time, music that belongs in any collection. I’ve been playing this album for 30 years and I can honestly say I’ve never once been tired of hearing it. I get tired of hearing bad copies.

I become absolutely incensed when I have to play the Mobile Fidelity version of this album, because what they did to this record is a travesty. If you want to know what the guitars on this album are NOT supposed to sound like, play the MOFI. And if you want to hear an even worse version, play the UHQR.