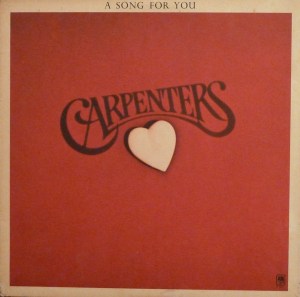 What We Listen For on A Song For You

The duo’s best album, and the place to start beyond the hits compilations. Up to the release of A Song for You, the Carpenters’ success had seemed an awesome if somewhat fluky phenomenon, built on prodigious talent, some beautifully crafted pop sensibilities, and a very fortunate choice of singles — their albums Close to You and Carpenters, though they were top-sellers, both seemed just a bit thrown together. Then came A Song for You, a seemingly unified concept album written and recorded during a frantic period of concert activity, and brimming with lovely musical ideas even more lovingly executed, laced with good humor, and enough hits of its own to have established any artist’s career on its own. And even in between the hits, the album was built on material that could have made a whole career for anyone.