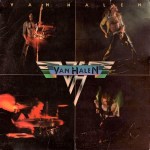 More of the Music of Van Halen

Reviews and Commentaries for the Music of Van Halen

Most copies just do not have the kind of weight to the bottom and lower mids that this music needs to work. Put simply, if your Van Halen LP doesn’t rock, then what exactly is the point of playing it?

The copies with the most resolving power are easy to spot — they display plenty of lovely analog reverb trailing the guitars and vocals.

And lastly (although we could go on for days with this kind of stuff), listen for spit on the vocals. Even the best copies have some sibilance, but the bad copies have much too much and make the sibilance gritty to boot.

Go ahead and turn up your nose if you like, but this music is widely considered classic rock by now. I’m not going to pretend it’s on a level with After The Gold Rush or Zep II, but this album does exactly what it’s trying to do — it really ROCKS.

At least it does when you have a pressing as good as this one. The All Music Guide gives the album 5 Big Stars, and I’m sure that more than a few of you out there think it deserves every last one of them.

Credit Donn Landee (and Ted Templeman too) with the rich, smooth, oh-so-analog sound of the best copies. He’s recorded many of our favorite albums here at Better Records. Most of the better Doobies Brothers albums are his; more by Van Halen of course; Lowell George’s wonderful Thanks I’ll Eat It Here; Little Feat’s Time Loves a Hero (not their best music but some of their best sound); Carly Simon’s Another Passenger (my favorite of all her albums); and his Masterpiece (in my humble opinion), Captain Beefheart’s mindblowing Clear Spot.